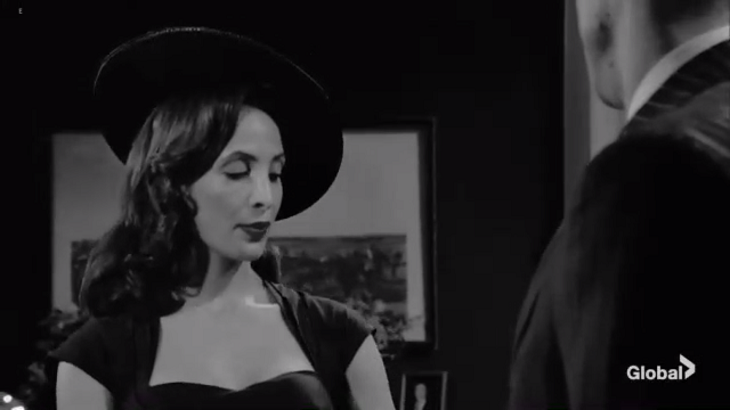 Traci Abbott (Beth Maitland) and Cane Ashby (Daniel Goddard) are bonding on The Young and the Restless. But the show doesn’t seem to be remixing pairs, where Traci and Cane form ‘Tane’. Instead, the next chapter in ‘Lane’s’ story is being presented to the audience differently.

Kudos to Y&R for creating a storyline within a story. That’s what’s happening as Traci begins her next book, forging into a historical fiction mystery for the first time in her accomplished writing career.

Y&R Spoilers– Lane Is Dead, At Least For Now

Flynn (Goddard in a dual role) and Iris (Christel Khalil, Lily Ashby, in a dual role) are imagined as 1940’s film noir characters in Y&R’s intriguing new tale. Co-executive producer and head writer Josh Griffith is building from former executive producer and head writer Mal Young’s retro family scenes that showed other actors play younger versions of the Abbott’s, with the family’s backstory brought to life many decades in the past.

Seasoned soap fans have been considering Lily’s rush out of town after Neil Winters’ (Kristoff St. John) passing. She’s said to have accepted a full-time job with Lakewood Prison, where she’s serving as an inmate counselor.

In response, Cane quit his job at Chancellor Industries and wants to work in a similar field as Lily. He also just told Devon Hamilton (Bryton James) that the ‘Lane’ house will be sold.

Young And Restless Spoilers– Traci And Cane On A Path To Romance?

Fans are wondering why the Ashby kitchen setting has only been shown recently, as apparently the main living room set no longer exists. Possibly, it’s been Y&R’s plan to eliminate ‘Lane’s’ abode along with the family itself?

Khalil’s voluntary drop to recurring status last year could mean that Lily and Cane are truly over. However, a resurgence of hope should be felt by ‘Lane’ fans through the storyline that Traci’s developing book implies. More Khalil and Goddard scenes are ahead and with them, the main characters they play could find their way back to each other, eventually.

The daytime grind makes it challenging to present fresh perspectives for any set of characters who’ve been together for many years. By having Traci serve as the story-teller for alter ego versions of Cane and Lily, Griffith and his team are creating a new path for an alternative edition of ‘Lane’. Whether that eventually leads to a reunion for one of Y&R’s most endearing and enduring couples remains to be seen.