Days Of Our Lives Spoilers: Victor Has A Secret– Could He Have A Terminal Illness? 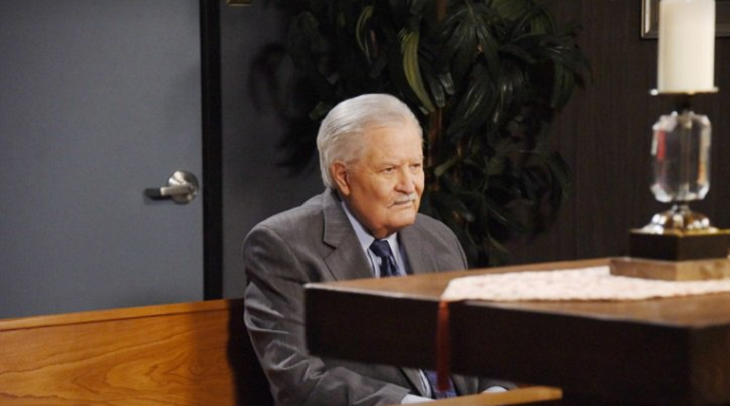 Days of Our Lives (DOOL) spoilers tease that Victor Kiriakis (John Aniston) may have a terminal disease diagnosis he has kept secret from his wife, Maggie Horton Kiriakis (Suzanne Rogers). On Tuesday, May 7, Victor and Kate Roberts DiMera (Lauren Koslow) were having drinks and talking at Doug’s Place about Titan, and the subject came up of Victor’s son Philip Kiriakis (John-Paul Lavoisier), which would not be unusual since Kate is Philip’s mother. Kate and Victor were married for a year back in the nineteen-nineties in which they had Philip together.

It’s possible he was talking about Philip and not himself to Kate when he talked about making things right with their son and then cut himself off when he said something to the effect of “after all, it’s only a matter of time…” but since Philip’s only past health issue was a leg amputation, unless Days of Our Lives powers that be plan to bring Philip back for a grim death storyline, chances are Victor was talking about himself!

Maggie is very insecure when it comes to Victor having anything to do with Kate, which seems rather bizarre considering Maggie and Victor have been married for nearly nine years, longer than Victor has been married to any other spouse. She confided in her daughter Sarah Horton (Linsey Godfrey) that she felt Victor was backing away from her emotionally and losing interest in her, and she doesn’t think Victor loves her anymore.

However, that may not be the case at all if he knows he’s going to die! He may be backing off out of self-protection or protection of Maggie, trying to create some emotional space between them to prepare her for his inevitable death. Victor’s only major health issue in the past, other than having been electrocuted in 2004 and presumed dead during his time on the island of Melaswen, was a stroke he suffered in 2008.

There may be some other factors in Days of Our Lives powers that be potentially creating a permanent exit storyline for Victor; John Aniston himself has been in poor health for several years and is in his mid-eighties. His daughter, superstar Jennifer Aniston has been trying to talk him into retiring for years and moving in with her. It’s possible she may have convinced him, but no official word has been released either by the Anistons or Days of Our Lives powers that be.

But for a legacy character like Victor Kiriakis, playing out an exit storyline of dying from a terminal disease would be much more dramatic and fitting than being killed off in a murder mystery.  Stay tuned to Days of Our Lives and keep checking DOOL spoilers frequently for all the latest news, updates and developments! In the meantime, come back to Hollywood Hiccups for all the latest spoilers right here.