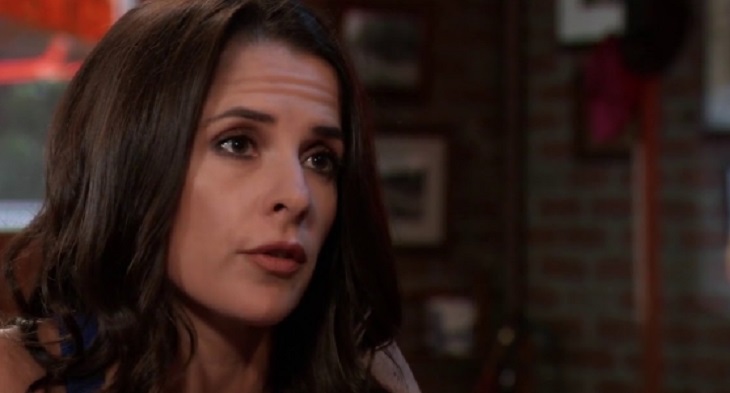 General Hospital (GH) spoilers for Monday, May 13 promise another day of drama, excitement and some sadness for General Hospital viewers. First, Cameron Webber (William Lipton) is talking to his stepfather Franco Baldwin (Roger Howarth) and he’s not happy about something! They are talking as Cameron appears to be doing his community service, or getting ready to; as he tells Franco, somebody is doing something just to impress his mom and his brothers!

Who could he be talking about? Who do they know who’s female who would want to impress Cameron’s mother and his brothers?

Then, over at Charlie’s Pub, Alexis Davis (Nancy Lee Grahn) talks to her ex-husband Julian Jerome (William DeVry), possibly about her daughter and his employee – or is she his ex-employee or returning employee? – Kristina Corinthos-Davis (Lexi Ainsworth) as she tells him he didn’t have to do it, but she’s glad he did; maybe she’s talking about Julian having hired Kristina back?

Over at the Quartermaine mansion, Ned and Olivia Quartermaine (Wally Kurth, Lisa LoCicero) and Drew Cain (Billy Miller) and Dr. Kim Nero (Tamara Braun) are talking about Oscar Nero Quartermaine’s (Garren Lake Stitt) final arrangements, as Kim sadly stands holding what appears to be a pretty blue cremation urn. Ned tells Drew and Kim that their son was way ahead of them, and had already made a plan for his memorial service!

Joss is telling Carly and Sonny that something is the last thing she feels like doing and doesn’t think she’s ready to do it. Could she be talking about her late boyfriend Oscar’s memorial service?

Last, Sam McCall (Kelly Monaco) is standing with Michael Corinthos) and Jason Morgan (Steve Burton), obviously talking about the final takedown of Shiloh Archer (Coby Ryan McLaughlin). Maybe Sam has confided the sting she has been trying to run at Dawn of Day to Michael and involved him in it, and she asks Jason if he’s going to help them.

Stay tuned to General Hospital and keep checking GH spoilers frequently for all the news, updates and developments!  As always, more detailed spoilers and a full collection of pictures for the week in question will appear on Soap Opera Spy, where there will be more clues and hints over exactly what’s going on.