The Bold and the Beautiful’ Spoilers: Hope Reconsiders Thomas’ Logic – Lope To Be Replaced By Tope? 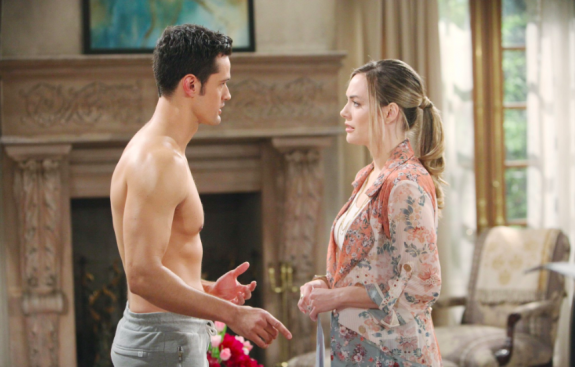 The Bold and the Beautiful spoilers tease that Hope Spencer’s (Annika Noelle) soul purge to her false facade cousin, Flo Fulton-Logan (Katrina Bowden), telegraphs trouble for Lope. As far out as it initially seemed, Thomas Forrester’s (Matthew Atkinson) plan to marry Hope appears to have crossed one hurdle.

As B&B fans recall, Hope instantly rejected Thomas’ bling ring offer. After pouring his heart out to Hope. Thomas pulled out the jewelry box, opened it, and presented his the ring he’d kept for Hope from the past, and asked her to marry him.

Of course, Hope is still happily married to Liam Spencer (Scott Clifton), who is the self-proclaimed love of her life. But Thomas is working off his truth, which is a modern soapy phrase that proposes (pun intended) no absolutes.

When there are no certainties in life, everything in this fictional version of Los Angeles, California, is what each character chooses to believe. The main problem with Thomas’ approach is that he’s being fully self-centered. Hope is definitely the opposite.

B&B Spoilers: Thomas Forrester Is Not Afraid Of The Consequences

And no, Mr. Forrester isn’t working off the theory that opposites attract. He’s just boldly moving ahead, with consequences not considered.

So why would Hope be doubting herself the day after she rightly told Thomas to back off? Well, any mother who believes she lost what was her first-born child due to a stillbirth would be indefinitely emotionally affected. Triggers could then lead to self-doubt, which Thomas is playing off of.

To his credit, Liam Spencer applies a verbal thrashing to Thomas. The warning stabs a flag of honor on high moral ground. Hope is his wife and Thomas will respect that, or else.

Bold And The Beautiful Spoilers: Liam Spencer Is Maturing After Becoming A Father

In the recent past, Liam could be classified as wishy-washy. Not now, however. Fatherhood is allowing Liam to mature, where he’s transferring his protective parental instincts to husband duty.

His trip to Europe to visit Kelly Spencer (Zoe Pennington), her adopted sister, and Steffy Forrester (Jacqueline MacInnes Wood) was heartfelt. Little did he and Hope know, that the jaunt to Paris, France, was orchestrated by Thomas.

It must be added that Thomas’ sister won’t take kindly to what her brother did. He may have inadvertently turned Steffy into a stronger Lope ally.

Liam rallies to defend his marriage as Thomas expresses that Hope belongs to him. WATCH FULL EPISODE: https://t.co/1B81wOXyq6 #BoldandBeautiful pic.twitter.com/xKJ1XN56QY