The Bold And The Beautiful Spoilers, May 13-17: Liam Fights For His Marriage—Thomas Refuses To Give Up On Hope—Katie Tests Bill— Zoe Doesn’t Trust Flo 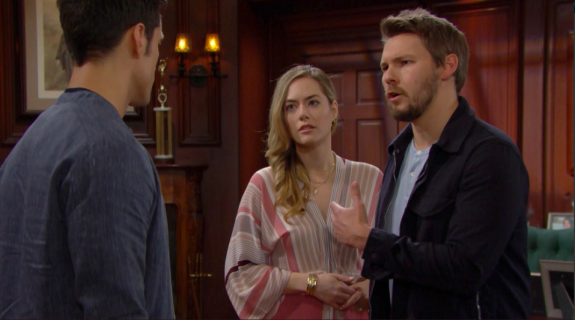 The Bold and the Beautiful (B&B) spoilers for the week of May 13 tease that Liam Spencer (Scott Clifton) will fight for his marriage. While Liam plans to fight for Hope Logan (Annika Noelle), Thomas Forrester (Matthew Atkinson) works overtime to win her over.

Katie Logan (Heather Tom) puts Bill Spencer (Don Diamont) to the test. She isn’t sure she can fully trust Bill so she outs Shauna Fulton (Denise Richards) up to test his loyalty. The two of them decide Shauna will try to kiss Bill and see if he lets it go any further. If Bill pushes her away, he will pass the test.

Of course, Bill is pleased that Shauna wanted to kiss him but he loves Katie. B&B spoilers say that he passes the test when he pushes her away and says he’s sorry he has to say no to being with her.

Bold And The Beautiful Spoilers: Liam Spencer Will Fight For His Marriage

B&B spoilers say that Liam will continue to fight for his marriage. He may be fighting a losing battle as Hope is starting to feel connected to Thomas in a way that he may not be able to compete with. Thomas will continue to tell Hope that with Douglas, they are a family. And, Hope wants to be the boy’s mother so she is seriously considering what he has to say.

In a conversation with Flo Fulton (Katrina Bowden), Zoe Buckingham (Kiara Barnes) reveals she has serious reservation about their secrecy pact. She will say that she wonders if Flo will tell Wyatt Spencer (Darin Brooks) the baby truth. Of course, Flo will tell her that she is serious about her pact with her and she doesn’t want the secret about “Beth” to come out, not now anyway.

It just so happened, Hope was at the door and heard the women discussing Beth. B&B spoilers say Hope will corner Flo and ask why she was talking about her daughter. it looks like Flo has some explaining to do on that.

As you can imagine, Zoe’s eyes grow big as she wonders what will come out of Flo’s mouth as she tries to come up with a story on why they were talking about her daughter. ‘