Days Of Our Lives Spoilers: Tripp Realizes That Claire Is In Cahoots With Eve 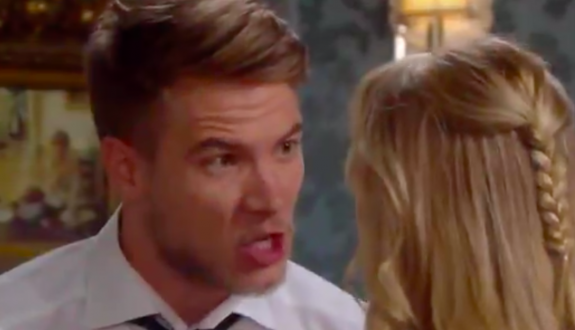 Days of Our Lives spoilers tease that Tripp Dalton (Lucas Adams) will soon realize that Claire Brady (Olivia Rose Keegan) is in cahoots with Eve Donovan (Kassie DePaiva) when he finds out about the recording that Haley Chen (Thia Megia) was blackmailed with, that forced Haley to publicly admit that their marriage to each other was a fake this week on Days of Our Lives!

DOOL Spoilers: Tripp Dalton Will Learn About The Recording

Undoubtedly, Tripp will learn about this recording either from Haley herself or possibly from JJ Deveraux (Casey Moss) who was in the room in Salem University Hospital when Eve arrived and played the recording in front of both of them, which was of he and Claire talking about the marriage being fake and Claire still being his girlfriend!

Tripp will realize there was no other way to obtain that recording, which was made there in the loft where he and Haley live, and on the day that Claire was moving out, except through Claire both making the recording and delivering it to Eve!

Days Of Our Lives Spoilers: Xander Reveals He Still Has Leverage Over Nicole

Tripp had broken up with her but then apparently changed his mind after Claire had convinced him they could meet, be a real couple, and never get caught – until Melinda Trask (Laura Kai Chen) caught them in an embrace and told them about the first tape that had been made and she had broken into Eve and Jack Deveraux’s room at the Salem Inn and destroyed it!

Melinda warned them that if they were caught by anyone else, say Jack or Eve, or the ICE agent, Laverne Smith (Stacie Greenwell) that Haley could be deported, and Tripp could be put in prison for immigration fraud!

All this will go through Tripp’s mind when he realizes that even though Jack and Eve could have bugged he and Claire’s room the night the original recording was made, there is no way that they could have broken in and bugged the loft!

There will be definitely be some explosive drama when Tripp confronts Claire about setting Haley up to be deported and he may not be as safe from legal consequences as Eve made Haley think, either! Stay tuned to Days of Our Lives and check Days of Our Lives spoilers frequently for all the latest news, updates, and developments!