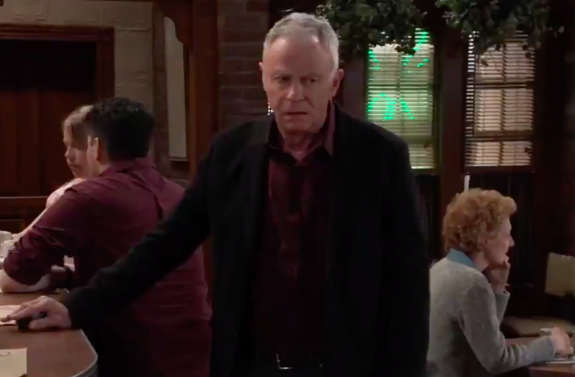 General Hospital (GH) spoilers tease that Robert Scorpio (Tristan Rogers) will discover that he’s lost something quite important. He’s been carrying around the engagement ring that Hamilton Finn (Michael Easton) is going to eventually give to Anna Devane (Finola Hughes), but he made a crucial mistake. He left the ring box on the counter at Kelly’s and then got distracted by Sonny Corinthos (Maurice Benard).

After his conversation with Sonny, Robert forgot to pick the ring back up, and he left it there, where it was found by Mike Corbin (Max Gail). As GH viewers know, Mike is well-intentioned but forgetful due to his Alzheimer’s, so it doesn’t look like the ring is going to make it back into Robert’s hands anytime soon.

And that’s going to put Robert in a real bind. Finn is starting to get impatient with him and he wants his ring back…now. After all, Finn would like to actually propose to Anna at some point, but he obviously can’t do so without the ring. So, a baffled Finn will continue to put pressure on Robert to return the ring.

Well, according to General Hospital spoilers, Robert isn’t going to actually admit that he lost the ring to Finn. Rather, he’ll put Finn off while trying to find a way to replace the ring. But as GH viewers know, the ring that Finn picked out for Anna is quite unique, and getting a replacement will be tricky.

So GH spoilers say that Robert will get some help from Mac Scorpio (John J. York) in his quest to replace Finn’s engagement ring. The brothers will work together to find out where Finn got the ring, then order a replacement quickly, before Finn finds out what they’re up to.

Of course, GH spoilers indicate that this year’s Nurses’ Ball will include a big proposal, and that could be Finn’s marriage proposal to Anna. But he’s got to have a ring, so that indicates that either (a) Robert will get a suitable replacement ring and Finn will be none the wiser, or (b) the real ring will resurface, courtesy of Mike.

Either way, General Hospital spoilers say that the original ring will ultimately get back in Finn’s hands. We’ll just have to wait to see whether that happens before or after his proposal! Are you looking forward to Finn’s big proposal?