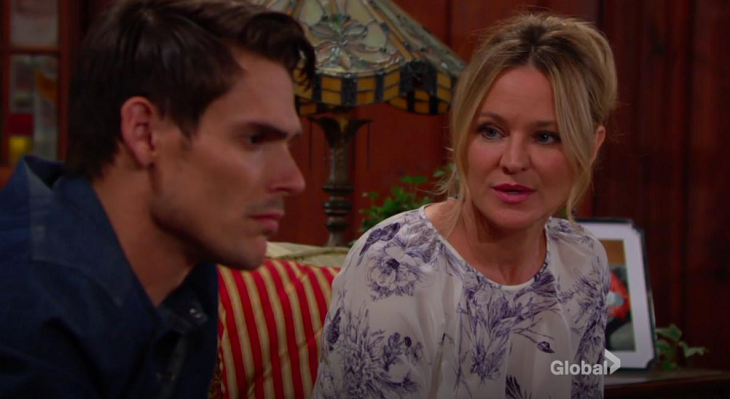 The Young and the Restless (Y&R) spoilers for Tuesday, May 14, tease that Sharon Newman (Sharon Case) and Nick Newman (Joshua Morrow) will talk at Nick’s place. She’ll inform Nick that Adam Newman (Mark Grossman) came back to Genoa City with her and Victor Newman (Eric Braeden). Nick will be guarded and worried about Adam wanting Christian Newman (Jamie and Alister Tobias), but Sharon will defend Adam.

Meanwhile, Adam will be with Victor at Newman Enterprises, but it won’t jog any memories for him. Victor will say that they should take things slowly, and he’ll ask Adam who he wants to meet first. Later, Nikki Newman (Melody Thomas Scott) and Victoria Newman (Amelia Heinle) will arrive in Victor’s office, but Victor and Adam will be gone.

Next on Y&R, Summer Newman (Hunter King) and Kyle Abbott (Michael Mealor) will argue. Summer will be hungover from her night out with Theo Vanderway (Nic Luken) and the two will argue about schedules. Kyle will tell her that he knows that she’s trying to create reasons to spend time with him and it’s not going to work.

The Young And The Restless Spoilers: Phyllis Goes Back – Michelle Stafford Switch Approaching

Jack Abbott (Peter Bergman) will arrive, and while Summer steps out, Kyle will complain to Jack about Summer’s manipulations. Later, Summer will talk to Jack privately and tell him that Phyllis Summers (Gina Tognoni) tried to hack into her Jabot files. Jack will be pleased that Summer spilled the beans.

Next on Y&R, Lauren Baldwin (Tracey E. Bregman) and Phyllis will chat over coffee, and Phyllis will admit that she pitched her new accessories company to Ashley Abbott (Eileen Davidson). Lauren will suggest that Phyllis try building something on her own, without an Abbott. Phyllis will then get a text from Jack saying “Nice try.”

Back at Nick’s house, Adam and Victor will arrive. Nick and Adam will have a tense talk. They’ll discuss the night of the explosion (which Adam doesn’t remember), and Nick will tell Adam that he can’t buy his amnesia story. Adam will say he remembers nothing, and Nick will decide to give him the benefit of the doubt.

Victor will then take Adam to the tack house, and the men will talk. Adam will wonder what Victor is expecting from him, supposing he gets his memory back. Victor will tell Adam that he missed him and that they could work together. Later, Sharon will arrive and Adam will let her know that she’s really his only friend right now.

Y&R SPoilers– Victor Asks Nikki To Give Adam A Chance

Next on Y&R, Kyle and Lola Rosales (Sasha Calle) all meet at the park for a picnic. Lola will relay that Mia Rosales (Noemi Gonzalez) and the baby should be ok, and Kyle will tell Lola that he had a discussion with Summer about boundaries. Kyle will then float the idea of them getting a place of their own together.

Back at Newman Enterprises, Victor will catch up with Victoria and Nikki. He’ll want them to just give Adam a chance. Later, Nikki will express concern to Victor about what he’s done to the family by bringing Adam back.

Next on Y&R, Lauren and Jack will have a conversation at Jabot about Jack being alone and how he’s better when he’s in a relationship. She won’t like the fact that he’s eating alone at the office. Then, as Jack is eating, Phyllis will arrive, angry. Jack will inform her that his text earlier was a warning.

Back at Nick’s house, he and Victoria will have a conversation about Adam. Victoria will want to know about his talk with Adam earlier, and Nick will relay that Adam seemed sincere to him. But Victoria will remind Nick that Adam’s a master manipulator and they need to be careful. Further, Victoria will say that she thinks Victor has a hidden reason for bringing Adam home.

Finally, on Tuesday’s episode of Y&R, Adam will be alone in the tack house when he opens a bag of cash then stashes it in the bar. He’ll then text someone, writing that he’s in Genoa City and that everything is going smoothly.