The Bold And The Beautiful Recap, Tuesday, May 14: Katie Logan Has A New Plan For Bill Spencer–Shauna And Flo Move In With Quinn 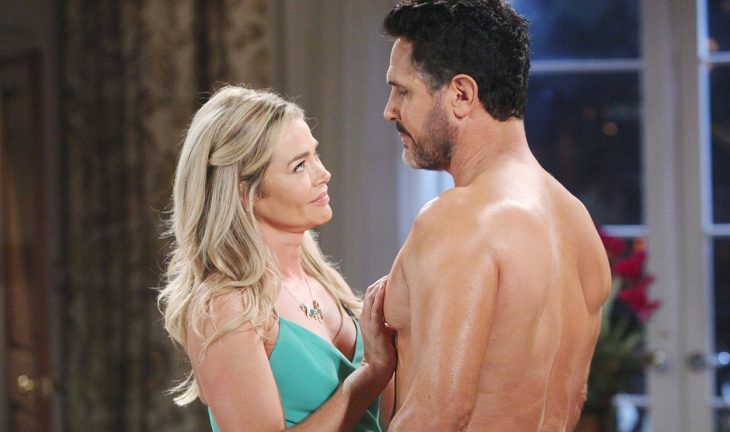 It begins at Brooke’s place, where she and Katie are talking about her relationship with Bill. Brooke thinks that Katie is making the right decision, while Katie admits that she still has her trust issues with Bill. She also tells Brooke that Bill and Shauna Fulton (Denise Richards) looked a little took close for comfort the last time she saw them together. That’s when Katie decides that before she takes any further steps with Bill, she needs to talk to Shauna first. Brooke doesn’t understand but Katie assures her that she knows what she’s doing.

At the Forrester mansion, Shauna is very excited to be moving in with Quinn Forester (Rena Sofer). When Flo appears, Shauna tells her with excitement that they are moving out of their old apartment and will be moving in with the Forresters instead. Flo appears a little hesitant at first, prompting Shauna to have her thank Quinn for her generosity. Quinn goes to tell Eric Forrester (John McCook) the good news.

The Bold And The Beautiful Spoilers: Katie Tests Bill With Shauna—Will He Pass The Test?

Shauna can read her daughter’s mind and knows that she’s thinking about her baby swap secret. When Flo accidentally says it out loud, Shauna panics and remind her that they made a pact to never speak about it out loud. Flo is warned not to mess up this for them, as it’s an opportunity for a better life. Shauna says that they are now living the good life before she’s interrupted by Katie’s call.

Back at Brooke’s house, Brooke can’t help but wonder what Katie has on her mind. Shauna then arrives. She tells them that she has agreed to move into the Forrester mansion with Quinn and Eric. Katie then can’t help but ask Shauna if she would be interested in rekindling her romance with Bill.

Shauna says there’s no way it would ever happen and that she can trust her. Katie then goes on to explain that she’s been burned one too many times in the past by Bill and that she wants Shauna to test Bill. Katie wants to know for sure if Bill is indeed dedicated to her and their family or if he’s just playing a game with her.