Welcome to your Wednesday, May 15 General Hospital recap! We begin our day at the retirement home, where Mike Corbin (Max Gail) is on the couch having a chat with Yvonne (Janet Hubert). She’s telling a story about her dog when his son Sonny Corinthos (Maurice Bernard) arrives. Mike says she needs to talk to him – he’s going to propose to Yvonne.

At the Metro Court bar, Robert Scorpio (Tristan Rogers) and Mac Scorpio (John York) have the faux ring for Anna. Felicia Scorpio (Kristina Wagner) says ring or no ring, she’s right for proposing, just as Anna Devane (Finola Hughes) approaches. Anna tries to run away but hits the door and they all see her.

At the hospital, Hamilton Finn (Michael Easton) and Jordan Ashford (Brianne Nicole Henry) are playing a board game. Finn says playing games is a great way to pass the time. Stella Henry (Vernee Watson) comes into the room all excited about the transplant and asks when it is scheduled. Jordan says there’s been a complication and she’s not getting a transplant.

Stella is upset about the transplant issue and finds out that Kevin is prediabetic and cannot donate. Jordan says that she has not told Curtis the news, which makes Stella even more angry. April calls Curtis’s phone and says she’s ready to talk to them. Marcus shows up to bring Jordan some flowers. 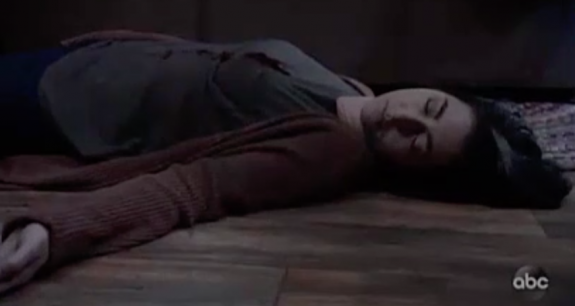 In Toronto, Laura Webber (Genie Francis) and Curtis Ashford (Donnell Turner) continue to discuss the woman April they visited, who they believe is lying. Laura finds out that she lied about being on a flight from Miami.

Curtis says that at April’s house he saw the gossip section clearly opened to a photo of Ava Jerome (Maura West) and Kevin Collins (Jon Lindstrom). They both realize that the paper was probably for Ryan.

At the coffee shop, Carly Corinthos is sitting down as Jason Morgan (Steve Burton) is offering to get her something to drink. She says she is fine but is sad about the death of Oscar. She says though that she is grateful for the new baby and grateful for Jason. Carly has some chamomile tea and inquires about the progress with capturing Shiloh.

In the park, Sam McCall (Kelly Monaco) runs into Shiloh Archer (Coby Ryan McLaughlin) who asks what she is doing out late. She relays she was at Oscar’s memorial and is getting fresh air. Shiloh says they need to catch up and finish where they left off. Sam asks if anyone else at Dawn of Day knows that she is doing the initiation – he says they will accept her. 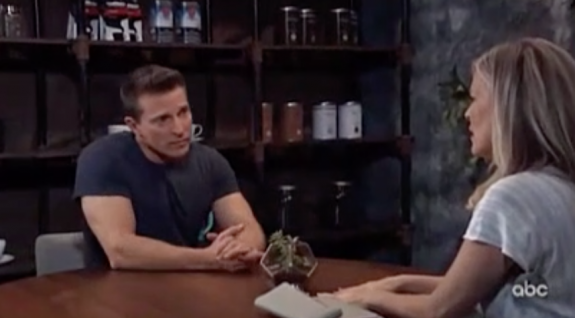 Sonny Corinthos says to his dad Mike that they need to discuss the proposal. Mike gets agitated and questions why he is getting so negative about the proposal. Sonny says that Yvonne’s family needs to have a say in it. Mike says that he should talk to Stella first.

Anna pretends she did not hear them talking about the engagement and questions why they all seem so solemn. Felicia and Robert lie and say they are talking about the Intruder. Anna says she thinks that lovers in the past should probably stay in the past. Anna says she’s not marriage material anymore. Felicia says that people grow and change and that marriages can work in the end. 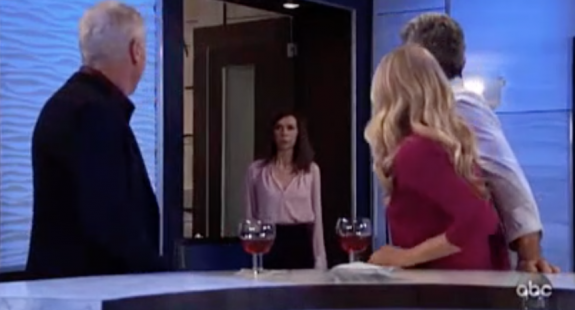 Mike calls Stella and tells him that he’s proposing to Yvonne. Sonny sees Stella and Marcus and approaches them about the “situation.” Mike proposes to Yvonne in front of everyone.

Carly doesn’t feel well and Jason tells her they should go to the hospital right away. She finds out that her CBS test results are back and Epiphany tells her she needs to rest.

Curtis and Laura arrive at April’s house and the door is ajar. They find that April has been murdered! Laura steps outside as Curtis is knocked out. Just as she finds him passed out, someone comes barreling towards her as she screams out ……flash to preview