Days Of Our Lives Spoilers: A Stunning Secret Is Revealed– Is Someone Impersonating Nicole? 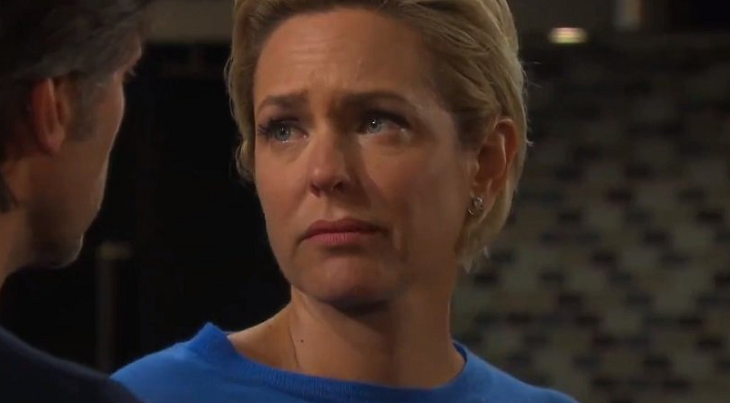 Days of Our Lives (DOOL) spoilers tease that a stunning secret will be revealed this week. Is Nicole Walker (Adrienne Zucker) really herself, or could someone else be impersonating her?

The viewers are wondering why Nicole and Xander Cook Kiriakis (Paul Telfer) showed up in Salem at around the same time, and think Nicole is not acting like herself!

DOOL Spoilers– How Did Nicole Know Where Eric Lived?

Eric didn’t live in this apartment when Nicole was supposedly killed in the explosion, Paul Narita (Christopher Sean) did, and when Eric explained to her about the letter that came from Nashville to Justin Kiriakis (Wally Kurth) she covered with that she’d forgotten she’d written it and it was written under duress when she’d been kidnapped by Xander.

Both Xander and Holly were in Nashville with Nicole at the time when Xander blackmailed her into marrying him! Eric and Brady Black (Eric Martsolf) rescued Holly in the explosion but were not able to rescue Nicole!

Days of Our Lives viewers will recall in October 2018, Sami Brady (Alison Sweeney), her twin Eric and Brady all went to Nashville looking originally for her husband EJ DiMera (most recently Trey Baxter) and found him in the warehouse, which was a morgue-like facility with locked doors with labels.

In the latest #DAYS, Sarah tries to speak with Nicole on Eric's behalf.https://t.co/ZsCmioRrzb pic.twitter.com/0bwUe9U71M

The labels read AV, VA, AD, SD, WR, ED, and JD. This was Kristen DiMera’s (Stacy Haiduk) and Xander’s hideout as well, and Dr. Wilhelm Rolf (William Utay) appeared to be doing experiments on patients, one of which Sami found to be EJ, hence the label “ED”.

Days of Our Lives viewers have speculated that all these door labels represented Salemites who were missing or presumed dead; AV could be Ava Vitali (Tamara Braun), although her death is questionable, VA could easily be Vivian Alamain (then Louise Sorel), AD Andre DiMera (Thaao Penghlis), SD Stefano DiMera (Joe Mascolo, however the actor passed away.

So, if he came back he’d be a recast), WR was Wilhelm Rolf, and that room his lab, ED EJ DiMera, and JD Jack Deveraux (Matthew Ashford) who as Days of Our Lives viewers know, was brought back to Eve Donovan (Kassie DePaiva) alive but had amnesia.

Kristen tried to kill Eric and Nicole, with Holly in a stroller, went looking for him, Eric was found, and Sami rescued Eric then went to get EJ as a fire started in Rolf’s lab, which led to the explosion. Nicole had previously tricked Xander and knocked him out with a metal water bottle, and Sami then went looking for Brady to save him also, and in the meanwhile, an explosion trapped Nicole with Holly.

In the latest #DAYS, Nicole continues to rebuff Eric.https://t.co/ZsCmioRrzb pic.twitter.com/IWKgalF0mf

Sami fled with EJ after finding Brady, and Brady and Eric tried to rescue Nicole and Holly but were only able to rescue Holly, while Kristen and Xander fled the facility, with Xander only thinking about himself! Kristen, however, was wanting Brady for herself!

This is the reason that some Days of Our Lives viewers think that Nicole could really be Kristen in disguise, either through plastic surgery to look like Nicole, or wearing a life-like mask. Other Days of Our Lives spoilers tease that Xander and Nicole will celebrate their plan being successful, the plan implied being the faked kidnapping and death of Holly, and with Nicole’s dumping Eric and gravitating to Brady, Days of Our Lives viewers wonder if it’s really Nicole!