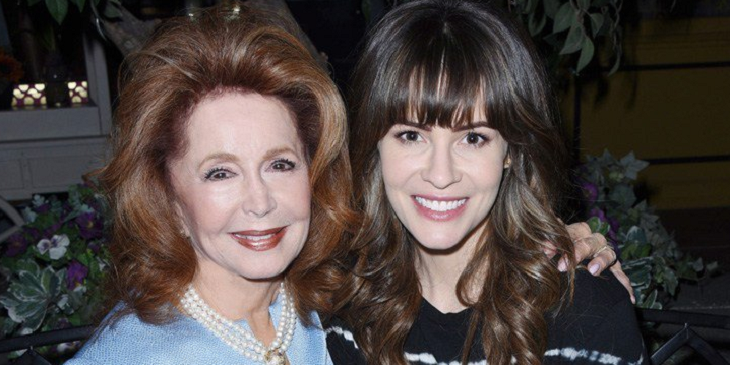 Suzanne Rogers, a.k.a Maggie Horton and Linsey Godfrey as Sarah Horton on “Days of Our Lives” talked about their special mother and daughter bond on and off the screen.

In an interview with Soap Opera Digest, Rogers and Godfrey recalled that there were no formal introductions when they first met. Rogers already knew who Godfrey was and the other way around. Rogers was in her makeup chair when Godfrey walked in and called her “mom,” to which she replied “baby,” then they both hugged. Since then, they never called each other by their first names. It was always “mom” for Rogers and it was either “honey,” “sweetheart,” or “baby” for Godfrey. It was the perfect match and they clicked instantly, the first time they met.

Days Co-stars Rogers And Godfrey Have A Strong Bond

They immediately had that special bond, which allowed them to do scenes together with ease. Emotional scenes weren’t that difficult to take as they were both affectionate individuals. How they act towards one another off and on screen was like a real mother and daughter relationship. They weren’t putting up an act, which made it easier for them to sell their Maggie and Sarah relationship.

Days Of Our Lives Spoilers: Did Jack Save Nicole From The Warehouse Explosion Last Year?

Apart from sharing similar physical characteristics, they also have similar traits. They are both optimistic, happy, and bubbly. They giggle the same and even make the same hand gestures. They’re both fashionistas so they love each other’s style.

They haven’t had the time to see each other outside work but they plan to do so soon. But if there’s downtime on set, they usually spend time talking about everything. They talk about movies, TV shows, and Rogers’ experiences back then. When it comes to offering advice, Rogers said she’s never given one to Godfrey and added that her on-screen daughter is so grounded.

The Women’s Differences Strengthen Their Bond

Now, what about their differences? Rogers was quick to note that she has a bigger butt and that Godfrey talks more. Godfrey admitted that Rogers reminds her of her real mom and even said it might be the reason why they go along very well.

Susanne Rogers’ other TV credits include “Quincy, M.E.,” “Little House on the Prairie,” and “Knight Rider.” She also won a Daytime Emmy Award for the Outstanding Supporting Actress in a Drama Series category in 1979. Meanwhile, Godfrey has appeared in various films including “The Culling,” “Altergiest,” and “Fatal Fashion.” Her TV credits include “One Tree Hill,” “NCIS,” “The Young and The Restless,” and “The Young and The Restless.”