General Hospital Recap, Thursday, May 16: Spinelli Is Back — Anna Is Confused– Carly Finds Out Baby’s Sex–Julian And Alexis Bond

Welcome to your Thursday, May 16 General Hospital recap! We begin our day at the coffee shop, where Lulu Falconeri (Emme Rylan) and Maxie Jones (Kirsten Storms) are discussing how she made it back from Toronto in time for the Nurses’ Ball. She says that they ran into her mother Laura Spencer (Genie Francis) and Jordan Ashford (Donnell Turner) in Toronto.

At the park, Anna Devane (Finola Hughes) meets her “son” Peter August (Wes Ramsey) for tea. At the hospital, Hamilton Finn (Michael Easton) meets up with his brother Harrison Chase (Josh Swickard) – he needs his help to get the engagement ring back.

At the hospital, Carly Corinthos (Laura Wright) goes into the doctor’s office and explains that she was not feeling well. The doctor says he has the CBS test results ready. The doctor tells her the baby is completely fine and she has nothing to worry about.

At the nursing home, Yvonne (Janet Hubert) is showing off her ring to Sonny Corinthos (Maurice Bernard) and his son Michael Corinthos (Chad Duell.) Mike Corbin (Max Gail) looks on lovingly and thanks them all for coming to the engagement party. Yvonne and Mike grab champagne as they do a toast to the engagement.

Michael asks Sonny where the ring came from that Mike gave to Yvonne. We can deduce its Finns missing ring.

Carly arrives at the home and Sonny asks about the baby.

In the park, Julian Jerome (William DeVry) thanks Alexis Davis (Nancy Lee Grahn) for getting him out of jail. Alexis tells him he should keep his fists to himself in the future. Alexis asks Julian what made him punch Kevin, he explains about the Ava situation. 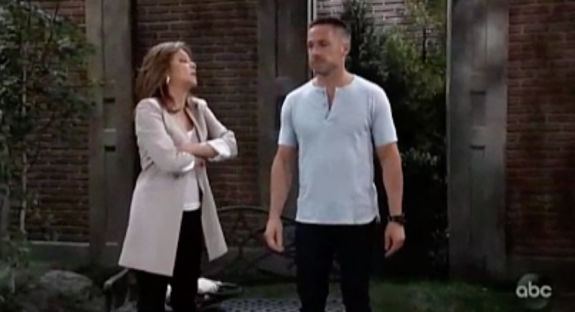 At Kim’s house, Kim Nero (Tamara Braun) and Drew Cain (Billy Miller) are sorting through Oscar’s things. Drew asks if she wants to take a break, but she says no. Kim looks at some of his school work and sees some nice notes from his teachers.

Kim realizes she has a ton of mail that she has not been through – she needs Drew’s help. 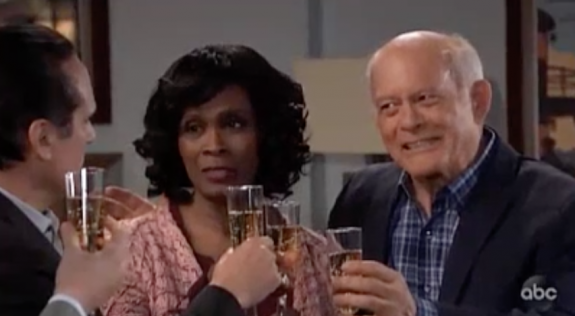 GH Spoilers– Spinelli Is Back!

Sam and Jason explain to Spinelli about the Dawn of Day initiation procedure. Sam wants them to bug the house and record what happens to her.

Lulu asks Maxie if her and Peter August (Wes Ramsey) have slept together? Maxie flashes to them in bed from the romantic trip. She says her only regret is that it took them so long to finally move ahead in their relationship. Lulu starts crying suddenly about missing Dante, while Maxie comforts her.
Maxie insists that Lulu come to the Nurses Ball, end of the story.

Jason and Sam need Spinelli's expertise to catch Shiloh in the act. But will he be willing to do what they want?
A tense, new #GH starts RIGHT NOW on ABC! @BfordAnderson pic.twitter.com/mkuadBoahZ

In the park, Kristian David (Lexi Ainsworth) sees her sister Molly Lansing (Haley Pullos) and they embrace. Kristina thanks Molly for meeting up with her and never giving up on her. Kristina wonders what is going on with Sam and will she see what Dawn of Day really is.

Peter thanks Anna for pushing him to make a move on Maxie. He asks her how she is doing and she says she thinks that Robert is going to propose. Peter questions why Robert would be proposing after all these years.

Finn tells Chase he wants to get the ring back from Robert before he can propose.

Carly tells Sonny the CBS test was clear, but the doctor wants to check on possible other issues. They open an envelope with the results or if it’s a boy or girl, they both cry.

Sam runs into Alexis and Dr. Neil and tells her the plan to trap Shiloh.

Julian shows up at Kim’s to comfort her. Kim and Drew discuss scattering Oscar’s ashes in his favorite places.

Mike thanks everyone for being at his engagement party while Carly looks worried.