The Young And The Restless Spoilers: Ana Drives A Wedge Between Teriah — Tessa And Mariah Face Tough Times! 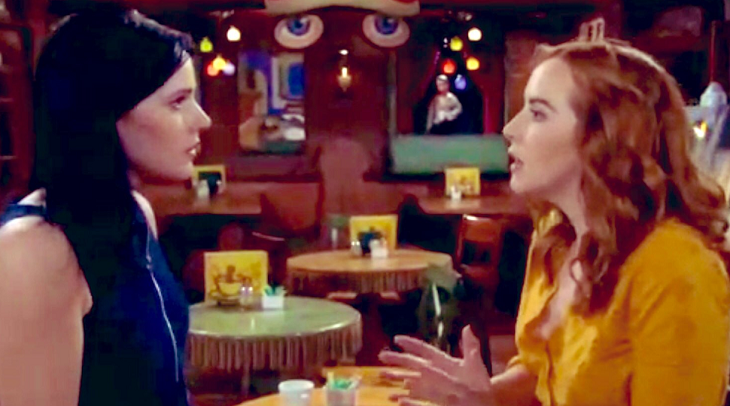 The Young and the Restless (Y&R) spoilers tease that Ana Hamilton (Loren Lott) will threaten Mariah Copeland (Camryn Grimes) and Tessa Porter’s (Cait Fairbanks) relationship.  The couple has not had an easy go. Tessa is a hard person to love, with many secrets.  Finally, it appeared that Teriah was getting somewhere and they will be happy together, only to face another huge obstacle– another woman!

Mariah saw the trouble with Ana coming and she tried to warn Tessa, but she doesn’t see it. Worse than that, Tessa thinks Mariah is trying to hold her back.  Here’s what you can expect in the next few weeks on Y&R.

Even though Ana hasn’t done anything that Mariah can point her finger at, she definitely senses something isn’t right with her.  Y&R spoilers state that Mariah told Tessa that Ana made sure to exclude her from any of the wardrobe discussion and she basically told her to go away.  When Mariah made a suggestion, she shot it down immediately.

Of course, Tessa doesn’t want to hear it.  She wants this to be her huge break in the music industry and she is afraid to take a stand with Ana, fearing it would ruin her only chance at being a big star.

Mariah’s biggest fear is Ana will find a way to turn Tessa against her.  She worries she will spend more time with her until she never sees Tessa.  Mariah knows that Tessa loves her and what they have is on solid ground, But she doesn’t trust Ana.  She thinks she wants Tessa and she is looking for a way to get rid of her.

Y&R spoilers tease that Tessa tries to tell Mariah she’s being insecure, but maybe she isn’t.  Is it possible that Mariah can see her what she is and she sees Ana’s ulterior motive?

For now, Tessa made Mariah promise to be more patient about Ana and the time they spend together.  Tessa promised her nothing will ever come between them, but something tells us that trouble is brewing.

Do you think Ana wants Tessa for herself? Is Y&R headed for its first same0sex love triangle? Don’t forget to come back to Hollywood Hiccups for more The Young and the Restless (Y&R) spoilers, news, and casting updates!