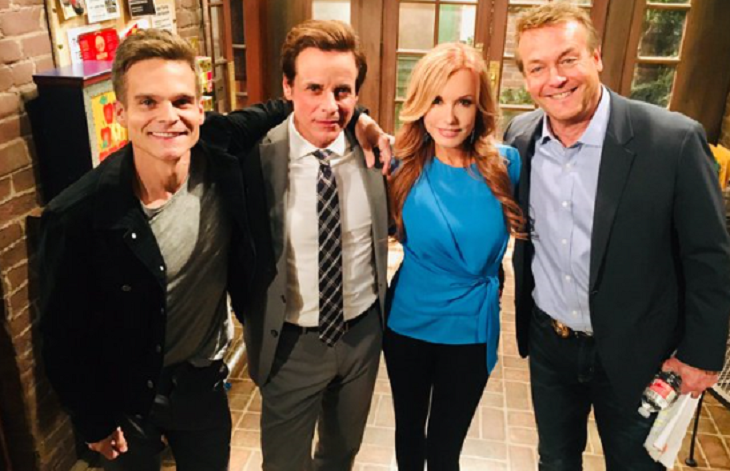 The Young and the Restless (Y&R) spoilers tease that Greg Rikaart is on his way to the CBS soap opera as Kevin Fisher. It’s been quite a while since Kevin has been seen on the show so it will be interesting to hear what he’s been up too.

A recent script leak confirms Rikaart’s first airdate and provided key information about his returning episode. Not only will he be coming back, but Lily Winters (Christel Khalil) will appear as well. Here’s what’s ahead on Y&R in the next few weeks.

Y&R Spoilers — Why Does Kevin Return?

By now, most of the Y&R fans have heard that Adam Newman (Mark Grossman) will be shot during the week of May 20. Of course, the first person that comes to mind that might have pulled the trigger is Chloe Mitchell (Elizabeth Hendrickson). However, Y&R has yet to confirm her return.

The Young And The Restless Spoilers: Adam Gets Shot—His Memory Floods Back!

A Y&R spokesperson told SOD that Chloe is one of those characters that can pop up at any time. They refused to confirm or deny Chloe’s return to Genoa City. So, that doesn’t really help us piece together the details of Kevin’s return to the soap opera, does it?

A recent script leak gave the fans a rare treat – we know when to expect Kevin back on the show. The script revealed that Kevin’s first episode is Wednesday, June 19. But the script didn’t give us any more real information about Kevin’s returning storyline.

Young And The Restless Spoilers– Script Leak Gives Us A Date

On Friday, May 10, Christian LeBlanc (Michael Baldwin) posted a picture of the Baldwin family together. In the photo, you see Michael, Kevin, Lauren Fenmore (Tracey E Bregman), and Fenmore Baldwin (Zach Tinker). It teased that Fen will be back in Genoa City soon, too.

Another tidbit that was on the June 19 script was Lily’s name was listed on the character list. That seems to suggest that Neil Winters’ (Kristoff St. John) will reading is fast approaching. The Y&R spoilers state that there will be a shocker at his will reading, something that leaves his family completely speechless.

Are you ready to see Kevin in Genoa City again? Don’t forget to come back to Hollywood Hiccups for more The Young and the Restless (Y&R) spoilers, news, and casting updates!

Please vote in our poll below and let us know how you think Chloe will return to GC!  Don’t forget to come back to Hollywood Hiccups for more The Young and the Restless (Y&R) spoilers, news, and casting updates! And as always, don’t forget to check back with Hollywood Hiccups for all the latest news, updates and spoilers on The Young and the Restless (Y&R)and all of your favorite daytime television shows right here!