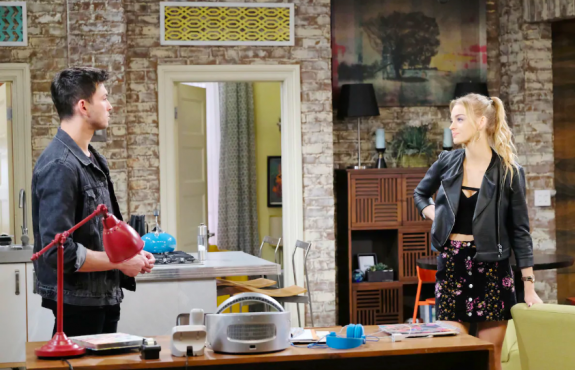 Days of Our Lives spoilers tease that Ben Weston (Robert Scott Wilson) will become more suspicious of Claire Brady (Olivia Rose Keegan) after he goes to the loft and catches her trying to burn some of Tripp Dalton’s (Lucas Adams) clothing this week on Days of Our Lives!

DOOL Spoilers: Eve Deveraux On A Mission To Frame And Take Down Ben Weston

With other Days of Our Lives spoilers teasing and the Days of Our Lives weekly preview showing newly appointed Police Commissioner Eve Deveraux (Kassie DePaiva) making it her mission to frame and take down Ben for the cabin fire that trapped Ciara Brady (Victoria Konefal) as revenge for Ben’s actual murder of her own daughter, Paige Larson (True O’Brien) as the Necktie Killer, Ben and Ciara may be put in the position of doing their own investigation to find the real culprit, and Ben will definitely have Claire in his sights!

Days of Our Lives viewers will recall a few months back that Claire was remembering how she found Ben’s lighter in the cabin and was fascinated with the fire, and set fire to the cabin with Ciara inside with a broken leg, unable to escape!

Days of Our Lives Spoilers: Maggie’s Demons Return, Brady Finds Her Passed Out

At that time, Claire wanted to eliminate her Aunt Ciara as competition for Tripp, who she and Ben actually conspired to break up, so Ben could have a shot at Ciara and Claire at Tripp. Ben, however, arrived in the nick of time after going to the drugstore to pick up his meds which Ciara had insisted he keep taking, and was able to carry Ciara away from the burning cabin!

However, Ben has been a suspect in the fire ever since, because of his previous misdeed of trapping Abigail DiMera (Kate Mansi) in a cabin and setting it afire, where he had held her at gunpoint and then overpowered Chad DiMera (Billy Flynn) who had tried to rescue the very pregnant Abby, who gives birth to Thomas (Asher Morrissette) and tied them both to a bed.

Ben set the bed on fire, and takes Thomas, but Chad manages to untie himself and Abby and they escape the burning cabin, and later Ben is tracked down and Thomas is rescued later from Ben by Chad.

With that history, it is no wonder that Ben keeps getting blamed for trapping people in cabins and setting them on fire! However, he was deemed insane and committed to Bayview, where he did recover, but is having a hard time keeping people believing it!

But now that he sees Claire burning Tripp’s clothes, possibly with an insane smile on her face, obviously relishing the sight of his clothes burning up and probably imagining it’s Trip burning up, Ben will put two and two together and probably bring Ciara in on his suspicions as well….if nothing else, that Claire is off the rails and acting like a firebug!

Stay tuned to Days of Our Lives and keep checking Celebrating The Soaps spoilers frequently for all the latest news, updates and developments!