Days of Our Lives Spoilers: Maggie’s Demons Return, Brady Finds Her Passed Out 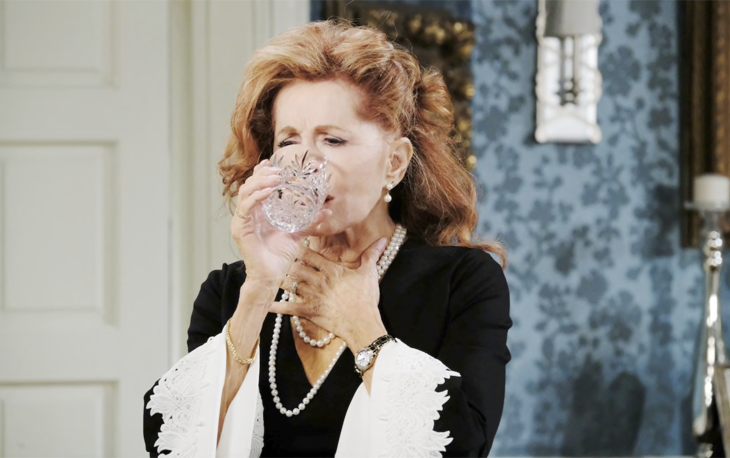 Days of Our Lives (DOOL) spoilers tease that Brady Black (Eric Martsolf) will soon get a big shock. For years now, Maggie Kiriakis (Suzanne Rogers) has been his rock. He’s relied on her for advice and support, and she’s been there for him on the various occasions when he’s fallen off the wagon. Maggie is Brady’s addiction and recovery sponsor, and she’s been sober for many years.

Days Of Our Lives Spoilers: Maggie Kiriakis Turns To Alcohol

But according to DOOL spoilers, Maggie’s demons will return, and she’ll turn to alcohol for comfort. Maggie has just lost her granddaughter Holly Jonas (Harlow and Scarlett Mallory). As DOOL viewers know, Holly was allegedly killed in an explosion, and Maggie is having a terrible time with it.

Holly was the daughter of Daniel Jonas (Shawn Christian), who was Maggie’s beloved son. Maggie had to endure Daniel’s tragic death at the hands of drunk driver Eric Brady (Greg Vaughan) several years ago, and losing Holly as well is just too much for her to bear.

Days Of Our Lives News: Robert Scott Wilson Scores A New Gig– What Does This Mean For DOOL’s Ben Weston?

But that’s not the only stressor in Maggie’s life right now. As DOOL viewers know, she’s experiencing some pretty serious marital problems with Victor Kiriakis (John Aniston). It seems that Victor would rather spend time with Kate DiMera (Lauren Koslow) than comforting his wife, and it’s unfortunate because Maggie could really use her husband’s support right now.

Feeling completely alone and at her wit’s end, Maggie almost drank when she impulsively ordered a vodka at the Brady Pub. But Nicole Walker (Arianne Zucker) happened to come by and stop her from taking a drink. Unfortunately, though, Days of Our Lives spoilers say that Maggie will face temptation again, and this time, she’ll actually take a drink.

Days of Our Lives spoilers say that a shocked Brady will find his friend and mentor passed out, so it looks like she’ll have considerably more than one drink. It will be a truly unfortunate situation, and hopefully, Brady will remain by her side as she finally comes to and needs to get help for her situation.

Of course, at some point, the truth will come out that Holly didn’t actually die in the explosion, but that might take some time, so it looks like Maggie will be in a considerable amount of emotional pain for a while. Do you think that Maggie will need rehab to get her through this terrible time?