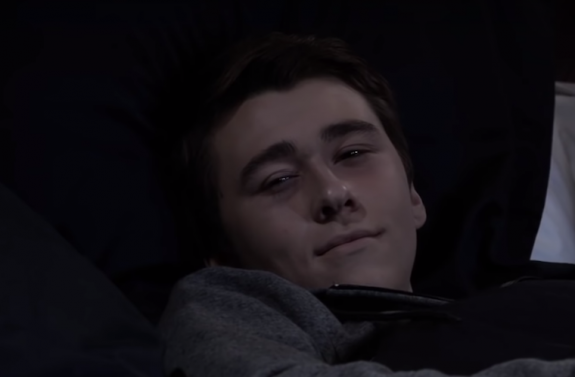 General Hospital spoilers indicate that Garren Stitt (Oscar Nero) is saying good-bye to Port Charles after a long and emotional stint on the show. As many fans know, Oscar passed away from a cancerous brain tumor just last month.

GH Spoilers: Oscar Nero’s Death Was One Of the Most Heartbreaking Scenes On General Hospital

Oscar’s death was one of the most heartbreaking scenes to watch on the show, as everyone was mourning the young teen, including his parents Drew Cain (Billy Miller), Kim Nero (Tamara Braun) and of course his girlfriend, Josslyn Jacks (Eden McCoy).

According to Garren, it’s been nothing but love for the young, talented actor as many of his General Hospital fans have reached out to him to tell him what kind of great job he did playing Oscar Nero on the small screen.

Garren told Soap Opera Digest in an interview, “Man, everyone is just so upset and all of the fans are loving it. I have been receiving a lot of messages from people online who are watching the show and can relate to the storyline, saying how they have lost someone or have a loved one who is going through it right now, and I just have so much sympathy for everyone, and they are in my prayers, really.”

The actor also said that the General Hospital cast and crew have been so great from the beginning to the end. As a matter of fact, they’ve even made it hard for him to leave simply because he is going to miss them so much!

The daytime soap star even admitted that his last episode as Oscar was his favorite one to shoot, despite his character’s death. Garren added, “I had a really good time shooting it.

I think the episode was one of my favorites, if not my favorite episode I have ever done. Everything from the camera work to the editing, to ever actor and actress that was in the episode, just killed it and nailed it and I’m just grateful to have been part of it. It was challenging to shoot because we shot parts of maybe four different episodes in one or two days, but it was such a great experience.”