Day of Our Lives Weekly Spoilers May 20 to 24: Shocking New Prominent Role for Eve – Secrets Exposed – Confessions – Hearts are Broken 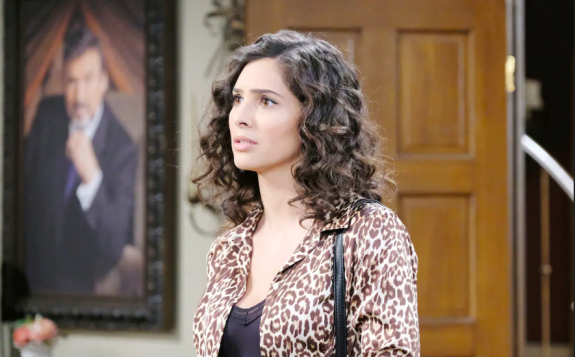 Days of Our Lives (DOOL) spoilers for the week of Monday, May 20 – Friday, May 24, 2019 reveal Nicole Walker (Arianne Zucker) has been acting very odd and extremely harsh towards those she is supposed to love the most.

But as fans of the NBC soap opera have noticed she is either the real Kristen DiMera, and a Phoenix rising from the ashes just like her father, Stefano DiMera (the late-Joseph Mascolo) or someone has done a great job in brainwashing beloved Nicole.

It has be revealed that Nicole is working with her supposed “husband”, Xander Cook Kiriakis (Paul Telfer). How is this partnership going to rock Salem?

DOOL sources tease that the new Mayor, Jack Deveraux (Matthew Ashford) makes a massive move, surprising all those who were considered family and friends to him when he supposedly died years earlier.

His first appointment as mayor was to fire Police Commissioner Hope Williams (Kristian Alfonso) and replace her with his very own wife, Eve Donovan Deveraux (Kassie DePaiva). Will anyone be able to stop this power hungry couple before they destroy everything Salemites hold sacred?

Lani Price (Sal Stowers) has become somewhat obsessed with taking care of Jordan Ridgeway’s (Chrishell Hartley) son, David; which included her taking a leave of absence from the Salem PD. She has been spending a lot of time, even staying with Rafe Hernandez (Galen Gering).

By mid-week, Lani will confess something to Rafe. Could this confession spell the end of her and Eli Grant’s (Lamon Archey) relationship?

Days of Our Lives spoilers show Maggie Horton Kiriakis (Suzanne Rogers) has had her share of heartaches and been tempted repeatedly to pick up an alcoholic drink; this week becomes too much for the beloved mother and grandmother and she will falter and give in. How will her loved ones react to her falling off the wagon?

Looks like it's time to make a run for it. #DAYS pic.twitter.com/3RUGhuAbfO

Days Of Our Lives Spoilers: Gabi Hernandez Discovered In Bed With Stefan DiMera

Breaking hearts seems to be the big theme this week as Chloe Lane (Nadia Bjorlin), who is still reeling from the death of toddler, Holly Jonas; will deal with another huge blow when she discovers her new lover and biggest supporter, Stefan DiMera (Brandon Barash) in bed with Gabi Hernandez (Camila Banus). The week will end out with an explosive secret being exposed!

Be sure to tune into NBC’s Days of Our Lives (DOOL) on Monday, May 20, 2019 to catch up on all the exciting stories unfolding right now in Salem. Check Hollywood Hiccups often for updates, news, rumors and spoilers!

Stay tuned to Days of Our Lives and keep checking Celebrating The Soaps spoilers frequently for all the latest news, updates and developments!