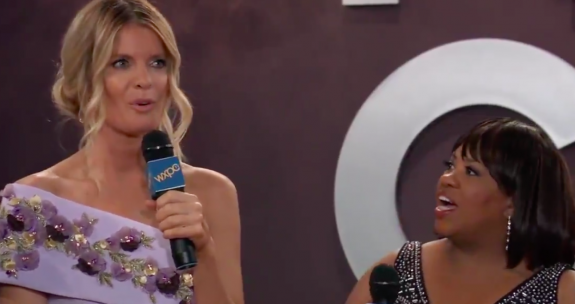 General Hospital spoilers tease that the Nurses’ Ball 2019 will have several surprises, among them several guest appearances! In Friday, May 17th’s episode which is the first of four episodes dedicated to the ball, we saw Chandra Wilson as Sydney Val Jean, (pronounced, Val Zhohn, not Val Gene, as she corrected co-host Nina Reeves, portrayed by Michelle Stafford) Crimson’s New York City fashion editor.

The two shared a little back and forth minor barb throwing as technically Nina would be Sydney’s boss, and Sydney made known she, not Nina, is the fashion expert and would be critiquing all the guests’ ball wear!

General Hospital viewers also wondered who the lovely blonde lady in the beautiful dress was at the entrance end of the red carpet who was greeting guests as the red carpet coordinator as they first stepped onto the red carpet.

Her name is Trish Ramish, and she is the real-life girlfriend of General Hospital’s Scott Baldwin, otherwise known in real life as Kin Shriner! Also on hand is George Pennachio, real-life ABC entertainment reporter who greeted Jasper Jacks (Ingo Rademacher) as he entered the Ball!

General Hospital Spoilers: Bradford Anderson Is Back As Damien Spinelli

Although it doesn’t look like he will be performing at the Nurses’ Ball this year, Bradford Anderson is reprising Damien Spinelli this week as he helps Jason Morgan (Steve Burton) set up surveillance equipment in the Dawn of Day house as Samantha McCall (Kelly Monaco) distracts Shiloh Archer (Coby Ryan McLaughlin) after bringing him as his date to his first ever Nurses’ Ball, which she had to convince him that it is not a scam or an unworthy charity catering to rich people!

Shiloh’s a little underdressed in a regular suit and tie compared to all the other men showing up in tuxedos, but then Robert Scorpio (Tristan Rogers) showed up in a more expensive looking suit, but still not a tuxedo! At least Shiloh owns a suit, which was an unexpected fact to most General Hospital viewers!

GH Spoilers: The Nurses’ Ball This Year Will Have Its Share Of Drama

This year’s Nurses’ Ball, as usual, has several intertwining stories weaving in and out of the background, as usual, including the Dawn of Day story, the Ryan Chamberlain (Jon Lindstrom) reappearance in Port Charles, and of course the new drama starting between Nina, Jax and Valentin Cassadine (James Patrick Stuart)!