‘The Bold and the Beautiful’ Spoilers: Thomas’ Use of Caroline’s Memory Revealing – Concerns About Behavior Grow 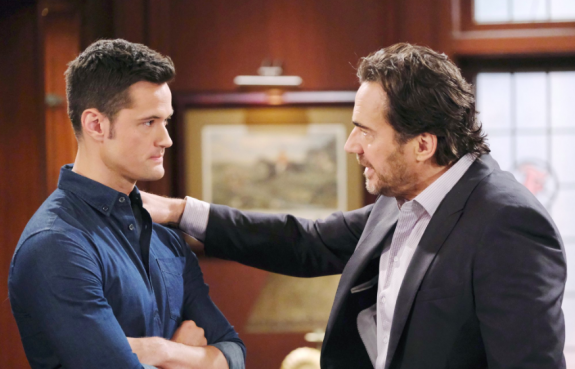 Thomas Forrester (Matthew Atkinson) claims that he came back to Los Angeles, California for two reasons on ‘The Bold and the Beautiful’. The first involves his son, Douglas Forrester (Henry Joseph Samiri), and the second is linked to Hope Spencer (Annika Noelle).

Of course, Thomas’ openly acknowledged plans now include the use of a purported letter from the deceased Caroline Spencer (Linsey Godfrey), which furthers the notion that Hope should serve as Douglas’ surrogate mother. However, considering what Sally Spectra (Courtney Hope) witnessed earlier this spring, B&B fans are wondering if Thomas forged Caroline’s handwriting.

Sally saw Thomas create a stick figure drawing that showed Douglas and Hope holding hands. When questioned, he didn’t deny that he was going to pass off the pencil sketch image as though it was created by Samiri’s endearing character. That alone makes Thomas’ claims about Caroline’s note suspicious.

Thomas is clearly in need of mental health counselling. Voluntary statements he offered, about he and Caroline not being together romantically when they were living in New York, means that he’s not grieving the loss of a soul mate. However, he surely has been impacted by the loss of a presumed friend and a woman who was the mother of his son.

While Liam Spencer (Scott Clifton) isn’t being asked to give Thomas the benefit of the doubt, some generous B&B viewers might. In consideration of the shock value in Caroline’s passing and the array of emotions that Thomas has been helping Douglas to deal with and he’s been grappling with himself, it’s reasonable to conclude his selfish intentions are partially misguided.

Along with Liam and through Hope’s couched rebuke of Thomas, any observer can see that the recast character Atkinson is playing needs guidance and possibly, professional help. Thomas flicked away his father’s Ridge Forrester (Thorsten Kaye) initial advice to respect Hope and Liam’s marriage, which was given, in part, due to Brooke Logan-Forrester’s (Katherine Kelly Lang) connection to the matter through Hope.

Seeing Thomas also swipe away Sally’s advice and most recently, ‘Lope’s’, one must wonder what it will take to open his eyes? It could be that nothing will because he’s not in a proper state of mind.

The return of Steffy Forrester (Jacqueline MacInnes Wood) and Taylor Hayes (Hunter Tylo), a psychiatrist whose specialty can be applied to this situation, will give Thomas two more advocates. His sister and mother will be inclined to halt Thomas’ efforts, even though their personal preferences could prevail if ‘Lope’ can be split.