Days Of Our Lives Spoilers: Will Has A Setback — His Memory Is Fading — Will It Affect His Mental Stability? 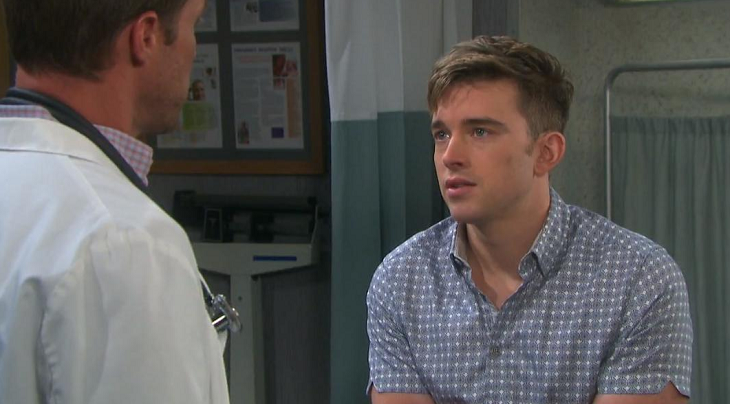 Days of Our Lives (DOOL) spoilers tease that Will Horton (Chandler Massey) will have a setback, and it will be enough of a setback that it will be a major source of concern for him, and probably for his partner, Sonny Kiriakis (Freddie Smith) as well!

As Days of Our Lives viewers recall, Will recently had a short-term memory problem crop up as he had forgotten a very important fact that he had previously known about, the kidnapping and presumed death of little Holly Jonas (Scarlett and Harlow Mallory) and then was shocked that he had forgotten something so important.

DOOL Spoilers– Kayla Explained The Cause Of Will’s Tumor

Dr. Kayla Johnson (Mary Beth Evans) had also discovered that his tumor was a side effect of a component of Dr. Wilhelm Rolf’s (William Utay) memory serum, of which Will had taken it upon himself to give himself much more of it than he was supposed to, because he wanted his memory to return faster; it did, but possibly he developed the side effect tumor because of the overdose of the serum!

Day of Our Lives Weekly Spoilers May 20 to 24: Shocking New Prominent Role for Eve – Secrets Exposed – Confessions – Hearts are Broken

What’s worse, he took all of the serum that was made up and then the formula was lost! Of course, Days of Our Lives viewers recall that it got “lost” first with Eve Deveraux (Kassie DePaiva) and then it got “lost” again with Xander Cook Kiriakis (Paul Telfer)!

DAYS Spoilers– Will Has A Setback

Will and Sonny already know that the radiation that Dr. Rex Brady (Kyle Lowder) had tried to shrink it with didn’t work, but it did seem to spark the short-term memory loss Will had a short time later; could the setback that Will experiences be more loss of his short-term memories or worse emotional reactions? Rex said it could cause that because of the spot in Will’s brain that was affected by the tumor.

In the latest #DAYS, Kayla has bad news for Sonny and Will.https://t.co/ZsCmioRrzb pic.twitter.com/zS1J8t14hH

While Kayla is doing extensive research on the biopsy and Will’s charts, finding a cure for the tumor without compromising Will’s memory could be difficult, as well as trying to reverse any other side effects of the serum when the formula is no longer available to study. They could try to reverse-engineer it from studying Will’s brain cells, but that would likely take longer than Will might be comfortable with, and who knows what else could happen to him in the meantime?