The Bold And The Beautiful Recap, Monday, May 20: Thomas Sends Hope A Letter From The Dead– Shauna Puts All Blame On Reese 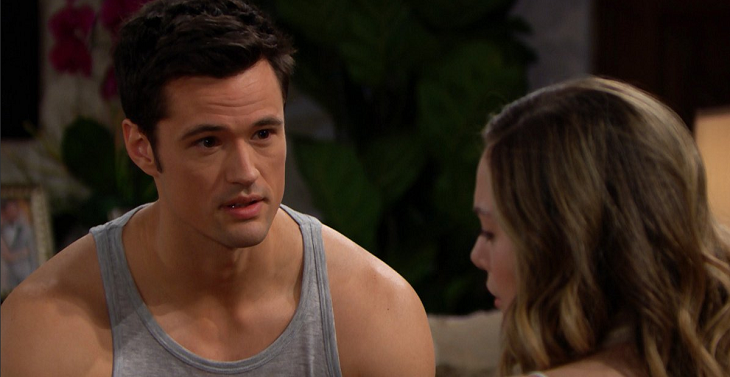 The Bold and the Beautiful (B&B)  recap for Monday, May 20thfinds Thomas Forrester (Mathew Atkinson) doing whatever it takes to win over Hope Logan (Annika Noelle), including forging a letter from Caroline Spencer (Linsey Godfrey). Wyatt Spencer (Darin Brooks) and Liam Spencer (Scott Clifton) both agree that Thomas is a snake while Shauna Fulton (Denise Richards) defenders her daughter Flo Fulton (Katrina Bowden) in front of Zoe Buckingham (Kiara Barnes).

It begins at the Forrester mansion, where Hope demands to know what Flo and Zoe were talking about when they overheard her talking about her daughter, Baby Beth. Zoe mumbles about Hope being an inspiration to everyone with her strength and courage. Flo also stumbles with her words and says that what happened to Hope shouldn’t happen to anyone.

Hope then apologizes for overreacting to their conversation. She also thanks them for being so understanding during her grieving process. After Hope leaves, Flo says she’s worried that Hope will never get over the supposed death of Baby Beth.

Shauna then arrives and learns what happened with Hope listening on to Flo and Zoe’s conversation. Zoe thinks it’s best if Shauna and Flo just leave and go back to Las Vegas. Shauna stands her ground and says that they aren’t going anywhere, especially now that Flo and Wyatt have reconnected and that she has a future with Forrester Creations.

The Bold And The Beautiful Spoilers: Tuesday, May 21 – Hope Is Deeply Moved By Caroline’s Letter – Shauna And Flo Move Into Forrester Mansion

Shauna also hits back at Zoe by reminding her that this is all of her father’s fault. Flo then chimes in and says that if Steffy Forrester (Jacqueline MacInnes Wood) found out the truth, it’s without a doubt that she would give the baby back to Hope. She also thinks that this secret might ruin Hope and Liam’s marriage.

In the cabin, Thomas is forging a letter from Caroline. He writes that Caroline wishes for someone to fill in for her, should anything happen to her or her son, Douglas. Later on, he sees Hope and she looks traumatized.

Today on #BoldandBeautiful, Shauna and Zoe are committed to keeping their secret but Flo wrestles with her conscience. pic.twitter.com/mz2guFefUV

Hope is thinking back about what happened the day Baby Beth died. Thomas then presents Hope with a box of letters and postcards from Caroline. Hope reads the letter that Thomas wrote, thinking it came from Caroline. It says that she would like for someone to be a mother figure for Douglas. Hope thinks that Caroline is writing about her.

At Wyatt’s beach house, Liam tells his brother that Steffy will be returning from Paris soon. Wyatt makes it pretty clear that he doesn’t trust Thomas and that they need to keep an eye out on home, especially with how he’s been acting towards Hope lately. Liam warned him to back off, but he’s worried that Thomas might end up doing something sinister to get his way.