The Bold And The Beautiful Spoilers: Tuesday, May 21 – Hope Is Deeply Moved By Caroline’s Letter – Shauna And Flo Move Into Forrester Mansion 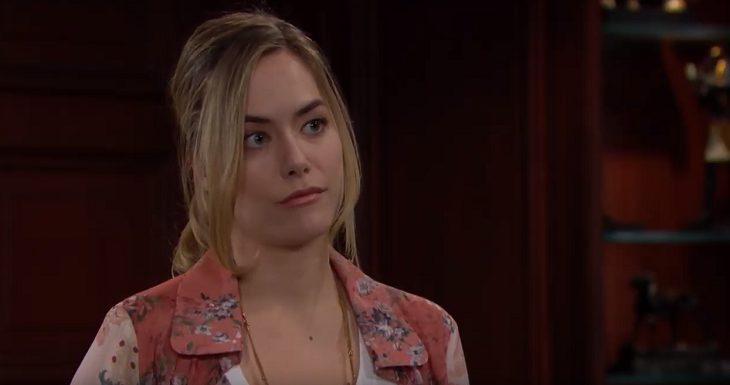 The Bold and the Beautiful (B&B) spoilers for Tuesday, May 21, tease that Thomas Forrester (Matthew Atkinson) will be feeling happy with himself. He’s just read Hope Spencer (Annika Noelle) a letter that he claimed was written by Caroline Spencer (Linsey Godfrey).

But B&B viewers know that Thomas actually wrote the letter himself and even copied Caroline’s handwriting style.

In this letter allegedly from Caroline, she discussed her desire for her son Douglas Forrester (Henry Joseph Samiri) to have a new woman take over as “mom” in the event anything happened to her. The letter definitely said all the right things to tug at Hope’s heartstrings and maternal instincts, as well as her feelings for Douglas.

It was a brilliant move on Thomas’ part to manipulate Hope, and clearly, Thomas is hoping that the letter will move Hope to accept Thomas’ standing offer to rekindle their flame and come together as a family with Douglas.

According to B&B spoilers, Hope will indeed be moved by the letter, and she’ll feel like she is the woman who “Caroline” was referring to. She’ll feel like perhaps her place isn’t really with Liam Spencer (Scott Clifton) anymore, but with Thomas and Douglas. Of course, that move would also assuage Hope’s guilt over keeping Liam away from Steffy Forrester (Jacqueline MacInnes Wood) and the girls.

The Bold And The Beautiful Poll: How Will Flo Reveal The Baby Secret? Vote Now!

And B&B spoilers for later this week indicate that Hope will indeed decide that her marriage to Liam must come to an end. She will choose to focus on being a mother to Douglas rather than a wife to Liam. B&B viewers should look for Hope to start to come to this decision on Tuesday’s episode, as she thinks more on Caroline’s letter and what it all means.

Meanwhile, on Tuesday’s new episode of B&B, Quinn Forrester (Rena Sofer) will be thrilled to welcome Florence “Flo” Fulton (Katrina Bowden) and Shauna Fulton (Denise Richards) into the Forrester mansion. Of course, Quinn and Shauna go way back, and Quinn is looking forward to having a friend close by since she doesn’t have many of those.

BOLD Spoilers– Flo And Shauna Move In With Eric And Quinn

Quinn and Eric Forrester (John McCook) will formally tend to Flo and Shauna as they move their things into the mansion. This will be a happy occasion for the Fulton women, although their happiness may be marred a bit by the interaction they just had with Zoe Buckingham (Kiara Barnes).

As B&B viewers know, Zoe seems to always be around to remind Flo to keep the baby swap secret and push for Flo and Shauna to move back to Las Vegas. And Zoe doesn’t like it that Flo and Shauna are moving into the Forrester mansion, either. She’s worried that the closer Flo gets to the Logans and the Forresters, the more likely she’ll be to tell Hope that her daughter is alive.

But it seems that Flo and Shauna will at least temporarily forget about their big secret as they move in and get settled into their new home. They’ll have come a long way from their digs in Las Vegas, and from Reese Buckingham’s (Wayne Brady) apartment, that’s for sure!

Be sure to tune in on Tuesday to catch up on everything happening on B&B right now. Check Hollywood Hiccups often for updates, news, rumors, and spoilers!  As always, more detailed spoilers and a full collection of pictures for the week in question will appear on Soap Opera Spy, where there will be more clues and hints over exactly what’s going on.