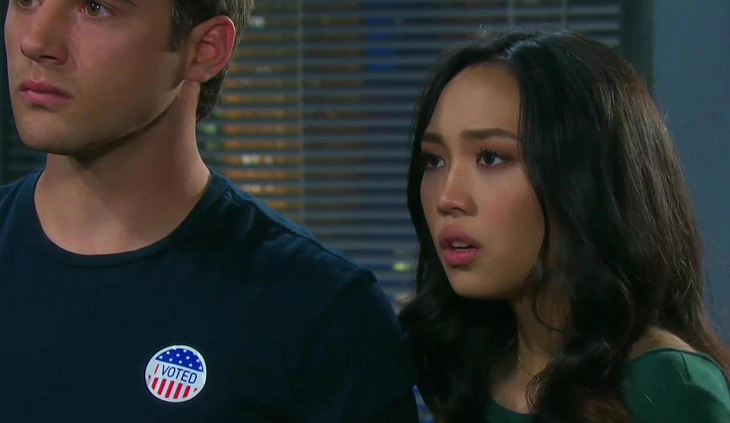 Days of Our Lives (DOOL) spoilers tease that JJ Deveraux (Casey Moss) and Haley Chen (Thia Megia) will continue to grow closer while hiding out at the Horton Cabin this week! While they are hiding out from the Eve Deveraux (Kassie DePaiva) version of the Salem Police Department and ICE, they will be hunkered down and trying not to be recognized or to draw attention to themselves.

With the cabin being isolated enough from civilization and electronic tracking tools, there will probably not be access to a tv or radio either, and there will be lots and lots of time to talk! They may, however, have “burner phones”, untraceable pay as you go cell phones so they can keep some contact up with the outside world!

DOOL Spoilers– Do Haley And JJ Have Burner Phones?

Other Days of Our Lives spoilers say that they will have reached out to Tripp Dalton (Lucas Adams) and that is probably where they get the burner phones and the way out to the cabin, although Tripp would have had to have taken extreme care himself to not have been caught with them or on the way to them.

After all, Tripp is on the radar of the Salem Police Department and ICE as much as JJ and Haley themselves are! The fact that Hayley married Tripp won’t make a lot of difference since it will likely be invalidated at the courthouse by someone in the Deveraux mayoral administration, and JJ and Hayley certainly have Tripp’s blessing to get closer as they want to and will!

DAYS Spoilers– JJ And Haley Have Deep Feelings For Each  Other

Days of Our Lives viewers will recall that JJ and Hayley were well on their way to becoming a real couple until JJ let slip to his dad, Jack Deveraux (Matthew Ashford) who he had trusted, about Hayley’s immigration secret, which Jack promptly told to Eve, and that is how the trust was broken between both JJ and Hayley and JJ and Jack, and although Hayley has forgiven JJ, it will be a long time before JJ will ever trust or forgive Jack!