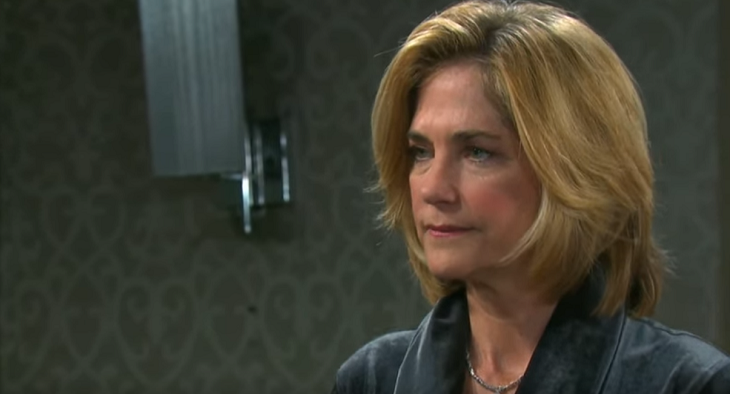 It begins with Eve setting her sights on Ben Weston as she not only targets him but sets him up, too. Ever since Eve has put given the top position at the Salem Police Department, it’s been nothing but chaos. The first thing that Jack did was suspend Rafe Hernandez (Galen Gering) from the force and gave his position to Eve.

Days of Our Lives spoilers tease that Eve will confront Ben and threaten him. She vows to make him pay for killing Paige Larson (True O’Brien). Even though the court found him to be mentally incompetent, that doesn’t seem to bother Eve.

She wants him to pay a huge price for killing her daughter. Eve is going to do everything in her power to also protect Claire Brady (Olivia Rose Keegan) from Ben since she couldn’t protect her own daughter from her.

DAYS Spoilers– Will Lashes Out

Also, there’s going to be a heavy drama between Will and Marlena. He is going to lash out at Marlena for his tumor, the same way he has been taking out his anger on other people. Even though Marlena is a very understanding person, this confrontation between her and her grandson will leave her absolutely heartbroken.

That’s when she decides to take matters into her own hands. With the help of John Black, she is going to search for Dr. Rolf’s diary in hopes that she gets some answers. She might not be able to save Will from his tumor, but she’s going to do everything she can to stop it from getting worse. Marlena is hoping that she can help doctors treat Will’s condition with more efficiency.

In addition, Maggie Horton (Suzanne Rogers) will also walk in on her husband Victor Kiriakis (John Aniston) with his ex-wife Kate Roberts (Lauren Koslow) as they share an intimate moment together. Days of Our Lives airs weekdays on the NBC network.