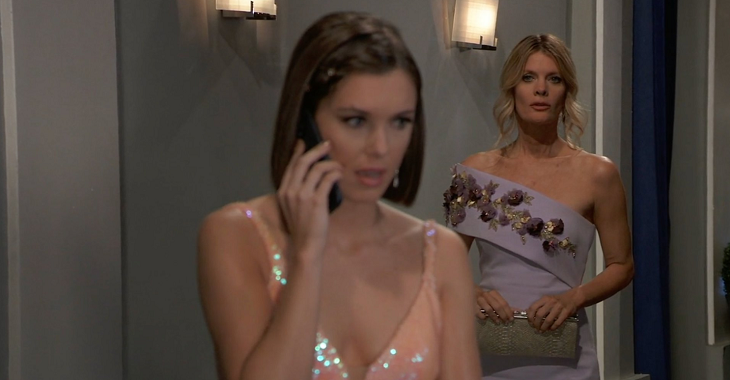 General Hospital spoilers for Wednesday, May 22 promise another exciting day of drama for the viewers as the Nurses’ Ball concludes! In the ballroom, Josslyn Jacks (Eden McCoy) has found the strength to come to the Nurses’ Ball after listening to the recording that Oscar Nero Quartermaine (Garren Lake Stitt) had Cameron Webber (William Lipton) record for her and brought to her at the Corinthos compound in Tuesday’s episode.

Carly Corinthos (Laura Wright) explains to Sonny Corinthos (Maurice Benard) that Oscar wanted Joss to sing the song they wrote by herself if he was not able. Cameron looks on, and Jasper Jacks (Ingo Rademacher) is off camera in the preview but sitting at their table also. Then Lucy Coe (Lynn Herring) comes up to the table to call Josslyn up to perform but she says she can’t sing!

Elsewhere at the Nurses’ Ball, Mac and Felicia Scorpio (John J. York, Kristina Wagner) prepare to give Lulu Falconeri (Emme Rylan) some bad news as Felicia tells her she needs to sit down; they have probably been warned about Ryan Chamberlain (Jon Lindstrom) being alive and on his way!

As General Hospital viewers know, in Tuesday’s episode Ryan had made it to the Nurses’ Ball and knocked his twin Dr. Kevin Collins (Jon Lindstrom) out cold on the floor!

In the ballroom, Nina Reeves (Michelle Stafford) comes by Michael Corinthos’ (Chad Duell) table as she tells him, referring to Willow Tait (Katelyn MacMullen) “that little friend of yours – she’s got a mouth on her!” undoubtedly referring to their dust-up earlier.

Meanwhile, Shiloh Archer (Coby Ryan McLaughlin), who overheard them, shows his true colors as he is shaking Willow and yelling at her not to lie to him! Willow was overheard on a call from Diane Miller (Carolyn Hennesy) saying the birth father didn’t know she was pregnant!

Elsewhere at the Nurses’ Ball, Ava Jerome (Maura West) has obviously just been informed by Detective Harrison Chase (Josh Swickard) that Ryan is alive and on his way to Port Charles, and she tells him she thinks we all know where Ryan is going, meaning herself!