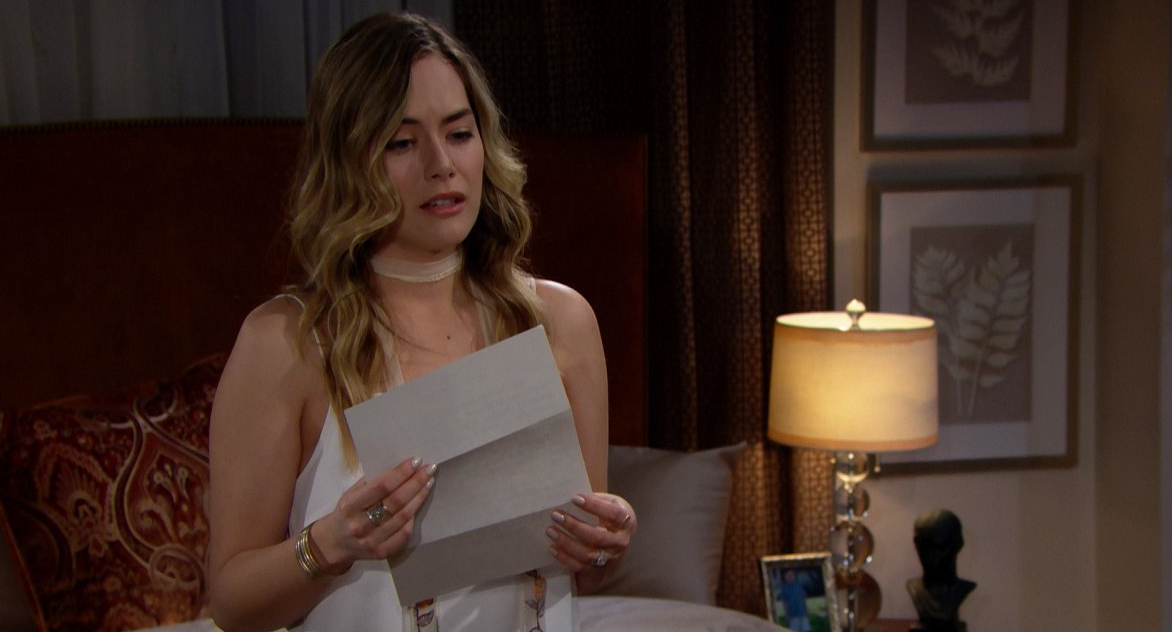 Thomas Forrester (Matthew Atkinson) is truly despicable on The Bold and the Beautiful. He actually abused the memory of his own son’s deceased mother, Caroline Spencer (Linsey Godfrey), to try and sway Hope Spencer’s (Annika Noelle) already fragile emotions.

It’s understandable that B&B recast this role. Viewers might have had difficulty believing that Pierson Fode’s version of Thomas, who moved to New York with Caroline, would forge a letter. But that’s what the current Mr. Forrester is doing, as part of his ongoing attempt to manipulate Hope into bonding Douglas’ (Henry Joseph Samiri) mother, with the goal of her also being with him romantically.

B&B Spoilers– Thomas’ Forgery Sinks To An All New Low

What type of person takes a box of a woman’s mementos, that he apparently just received in the mail, and uses the handwriting found on an included letter to create a forgery? Someone who’s selfishly desperate, like Thomas.

The Bold And The Beautiful Spoilers: Steffy Moved By Her Brother’s Actions – Thomas’ Shady Plots Stun

Misusing his God-given talents, Atkinson’s character penned a letter as though it was written by Caroline. Marked “Just In Case” on the envelope, the letter Thomas read to Hope is being presented as though it expresses Caroline’s wishes in case her demise happened, which it did.

B&B’s sharply written conflict had Hope’s heart slapped by a portion of the overheard conversation Zoe Buckingham (Kiara Barnes) and Flo Fulton-Logan (Katrina Bowden) were having at the amazingly plush Forrester estate. That setting reconfirmed that money doesn’t buy happiness, after which Hope then returned home. Thomas saw she was distraught and pounced.

Hope doesn’t yet know that her apparent cousin (Flo) is driving a newer car that was purchased with at least a part of the fifty thousand dollars Zoe’s father, Reese Buckingham (Wayne Brady), gave her for playing Phoebe-Beth’s (Isabella de Armas and Rosalind Aune) birth mother.

So there’s Flo pretending to be a mother when she wasn’t. And there’s Hope, being a mother, but thinking that Beth was stillborn. Thomas knows nothing about the baby switch but is using Caroline’s child and her supposed thoughts to bend Hope’s raw emotions because he wants her to be his wife.

How Thomas’ written efforts will be exposed is rather intriguing, as this talented artist created a passable forgery. What Hope does when she knows the truth is also worth the watch as this developing drama continues this spring.