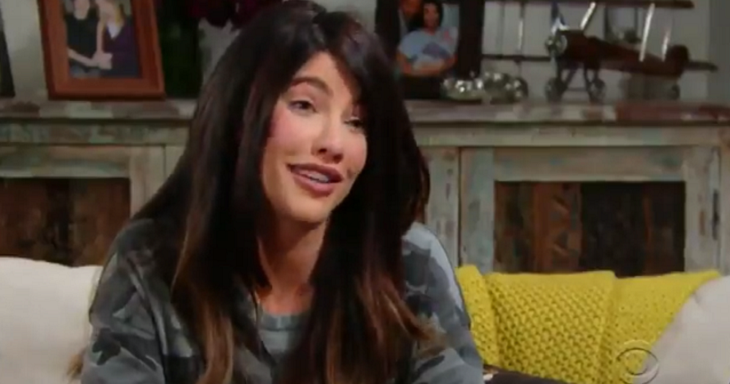 The Bold and the Beautiful (B&B) spoilers for Thursday, May 23, tease that word of Hope Spencer (Annika Noelle) and Liam Spencer’s (Scott Clifton) split will spread. Hope will fill her mother Brooke Forrester (Katherine Kelly Lang) in on her impending divorce, and Brooke will be absolutely stunned by the news. Hope will explain that she made the decision to end the marriage in order to put the children first and that Liam finally accepted it and agreed to the split.

Brooke may try to talk her daughter out of her decision and get her to reconsider, but Hope’s mind will be made up. As B&B viewers know, Hope believes that the split is the best thing for Kelly Spencer (Chloe Teperman and Zoe Pennington), Phoebe Forrester (Madeline Valdez), and Douglas Forrester (Henry Joseph Samiri), and nothing will be able to change her mind about that.

Knowing that she won’t be able to change her daughter’s mind, Brooke’s attention will turn to comforting her daughter. She’ll be there for support and let Hope share her feelings and cry on her shoulder. Both mother and daughter will be heartbroken over the situation.

Meanwhile, on Thursday’s episode of B&B, Steffy Forrester (Jacqueline MacInnes Wood) will return home from Paris with Kelly and Phoebe in tow. They’ll all be thrilled to be back home, and they’ll be even more thrilled with Liam drops by to visit. Liam and the girls will have a great reunion together.

But the visit will soon turn serious when the discussion between Liam and Steffy turns to Hope. The Bold and the Beautiful spoilers say that Liam will share with Steffy that he and Hope decided to end their marriage, and Steffy will be absolutely shocked. Of course, B&B viewers know that the reason Steffy went to Paris in the first place was to allow Hope and Liam time to work on their marriage in the absence of her and the girls.

It looks like Steffy will offer support to her ex-husband. Steffy was truly rooting for Hope and Liam’s marriage to work, so she’ll be disappointed in the news. But most of all she’ll just try to be a good friend to Liam during this difficult time.

Liam and Hope share a poignant and heartbreaking moment as their marriage crumbles around them. WATCH FULL EPISODE: https://t.co/8Ykd7R0puk #BoldandBeautiful pic.twitter.com/Y9bZC6FvGz

Finally, on Thursday’s new episode of B&B, Thomas Forrester (Matthew Atkinson) will catch up with his father Ridge Forrester (Thorsten Kaye) about Hope’s decision to be a permanent mother-figure in Douglas’ life. Ridge won’t like the sound of that, and he’ll worry that Thomas somehow interfered in Hope and Liam’s marriage.

Of course, B&B viewers know that Thomas indeed interfered with Lope’s marriage. He set up a situation in which he “found” a letter allegedly written by Caroline Spencer (Linsey Godfrey) – a letter that ultimately persuaded Hope to end her marriage to Liam and focus on Douglas full time.

Look for Ridge to counsel Thomas about interfering in other people’s relationships on Thursday’s episode. Unfortunately, this discussion will come a bit too late, since Thomas has done a bang-up job of taking down Lope’s marriage already.

Be sure to tune in on Thursday to catch up on everything happening on B&B right now. Check Hollywood Hiccups often for updates, news, rumors, and spoilers! As always, more detailed spoilers and a full collection of pictures for the week in question will appear on Soap Opera Spy, where there will be more clues and hints over exactly what’s going on.