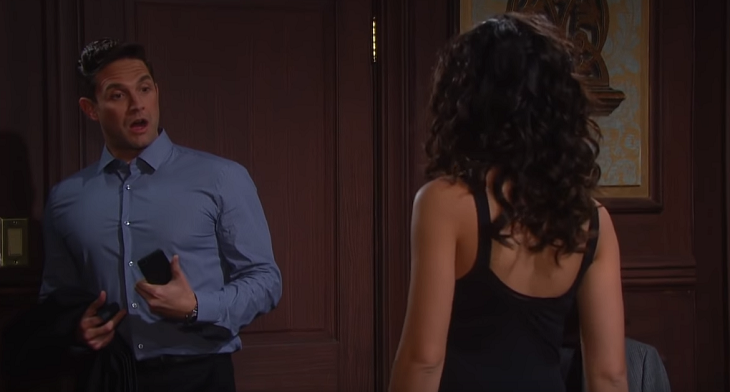 Just like they have been doing for the past several weeks now, Stefan and Gabi are once again getting hot and heavy underneath the sheets. There’s no denying that they have great chemistry together as Stefan is at a loss for words when he sees her nearly naked.

After their little lovemaking session is over, Chloe walks in on them in bed together. Her jaw drops to the floor and Stefan is again at a loss for words. However, Days of Our Lives spoilers indicate that Stefan will promise Chloe that he will cut Gabi out of his life forever. He’s willing to do just about anything to stay in her good graces.

Elsewhere, Maggie is losing her battle with the bottle. He puts a cover on her and lets her sleep it off. Little does Brady know that this incident is just the beginning to Maggie’s downfall. She started drinking away her sorrows after the death of little Holly Jonas (Mallory Twins).

Things will get so bad that Brady will stumble upon a drunk Maggie on the floor. Fans can also expect to see Maggie lash out at Kate Roberts (Lauren Koslow) for putting moves on her man, Victor Kiriakis (John Aniston).

Also, Xander is caught red-handed as his very unlikely partner in his scheme is revealed. Even though Nicole Walker (Arianne Zucker) has been crying a river about everything that has happened since she returned to Salem (including the supposed death of her daughter) it appears as though it’s been nothing more than an act.

Xander and Nicole are indeed working together behind the scenes to bring down all of the people who have done them wrong in the past. Also, many people will find out that Nicole isn’t the person that she says she is. They’ve only gotten started.