Days Of Our Lives Spoilers: Nicole Lashes Out After Holly’s Funeral– Blames Eric, Maggie, And Sarah For Her Daughter’s Death! 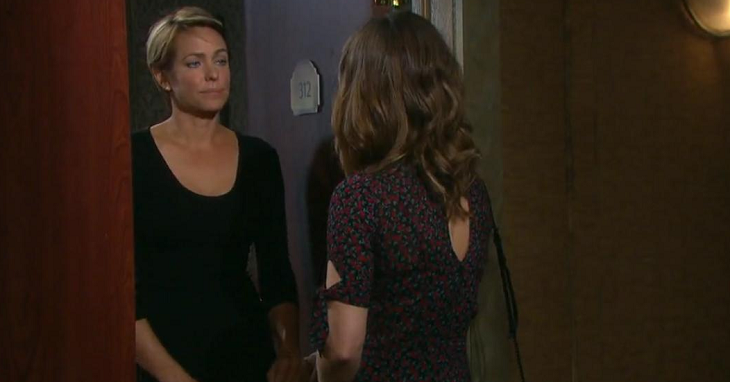 Days of Our Lives (DOOL) spoilers tease that a seemingly unhinged Nicole Walker (Arianne Zucker) will continue to lash out at Eric Brady (Greg Vaughan), Sarah Horton (Linsey Godfrey) and even Maggie Kiriakis (Suzanne Rogers) over Holly Jonas’ (Scarlett and Harlow Mallory) kidnapping and presumed death after her funeral!

Chances are she will continue to blameshift and drive poor Maggie in particular even farther over the edge! Days of Our Lives viewers know that Holly isn’t really dead and Nicole may either be brainwashed or she’s not Nicole at all because she knows Holly isn’t dead and is in cahoots with Xander Cook Kiriakis (Paul Telfer)!

DOOL Spoilers– Is Nicole A Fake?

Days Of Our Lives Spoilers: Ben Catches Claire About To Torch Tripp’s Clothes

The most common consensus among fans is that she could be Kristen DiMera (Stacy Haiduk) in disguise but some Days of Our Lives viewers aren’t sure even Kristen would call a baby a “whiny brat” when she too, has wanted a child! The real Nicole wouldn’t have rejected Eric like she has, either!

The question is, when is someone in Salem going to pick up on this and start doing some investigation? Shouldn’t there be some record at some hospital in Nashville that can tell the tale of Nicole being brought in, or someone they think is Nicole, from the burning warehouse facility in Nashville and at least have a record of a badly burned Jane Doe with blonde hair having been in a burn unit for several months, like Nicole claimed happened to her?

Stefan O. DiMera (Brandon Barash) was the only Salemite even concerned with identifying Holly’s body by DNA, and he was roundly ignored! In a town full of police, reporters, and ISA agents, some Days of Our Lives viewers find this more than a little bit strange! Perhaps Dr. Marlena Evans (Deidre Hall) and John Black (Drake Hogestyn) will find some answers to this mystery as well while looking for Dr. Wilhelm Rolf’s (William Utay) diary!

There are many seemingly unanswerable questions in this return from the dead storyline. Stay tuned to Days of Our Lives and keep checking Hollywood Hiccups spoilers frequently for all the latest news, updates and developments!