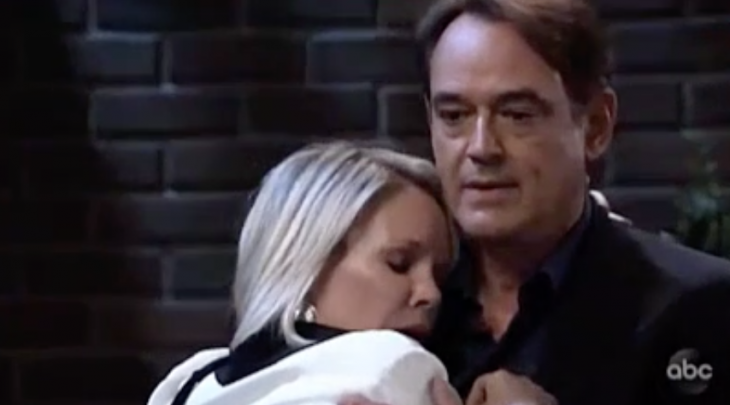 General Hospital (GH)  spoilers for Friday, May 24 tease of another exciting day of drama and intense situations for the fans!

As General Hospital viewers know, Lucas Jones (Ryan Carnes) has put two and two together and figured out that the birth parents of the baby he and Brad Cooper (Parry Shen) adopted are Willow Tait (Katelyn MacMullen) and Shiloh Archer (Coby Ryan McLaughlin), but he still doesn’t know that the original baby died and that the one they have is really Michael Corinthos (Chad Duell) and Nelle Benson’s (Chloe Lanier), Jonah Corinthos (Eric and Theodore)!

This, of course, is giving Brad anxiety attacks and he goes to father-in-law Julian Jerome (William DeVry) to update him on the situation and ask advice! Julian doesn’t know about the swap either, only about Willow being the birth mom. Julian tells Brad in no uncertain terms to keep his mouth shut and not say a word to anybody!

Back at the Metro Court, Lucy Coe (Lynn Herring), who was told to butt out when she was interrupting the group including Laura Webber, (Genie Francis) Kevin Collins, (Jon Lindstrom) Mac and Felicia Scorpio (John J. York, Kristina Wagner) and DA Margaux Dawson (Elizabeth Hendrickson), talking about the Ryan Chamberlain (Jon Lindstrom) case feels helpless but realizes maybe there’s something she can do; the scene shows her but not if she’s telling someone else, or thinking aloud.

Meanwhile, over at the PCPD, Lulu Falconeri (Emme Rylan) asks Detective Harrison Chase (Josh Swickard) for updates, presumably about the Chamberlain case asks if he has something, and what it is!

Over at the Dawn of Day house, Margaux is confronted by Sonny Corinthos (Maurice Benard) as he asks her where Shiloh Archer (Coby Ryan McLaughlin) is and where would he go and try to hide, as elsewhere Shiloh prepares to “initiate” a nearly unconscious Sam McCall (Kelly Monaco) somewhere else and tells her everything had been leading up to “this”, meaning sexually violating her while she is unconscious, which is what the Dawn of Day “initiation into the Trust” is all about!

Sam's putting herself in harm's way, West Coast. Has Jason prepared for everything Shiloh has up his sleeves?
Tune into a tense, new #GH – STARTING NOW on ABC! @kellymonaco1 pic.twitter.com/TQnTHIl97W

Curtis Ashford (Donnell Turner) updates Laura on his wife, Police Commissioner Jordan Ashford’s (Briana Nicole Henry) dire condition and that she will need a kidney transplant to save her life, and that Ryan may be her only hope!

Meanwhile, at Ava Jerome’s (Maura West) cabin, where Ryan has followed her from the Metro Court, Ryan tells Ava that they belong together, while Ava has a gun pointed at him, and then the barrel of a gun is shown and a BANG is heard! But whose gun and who did they shoot?