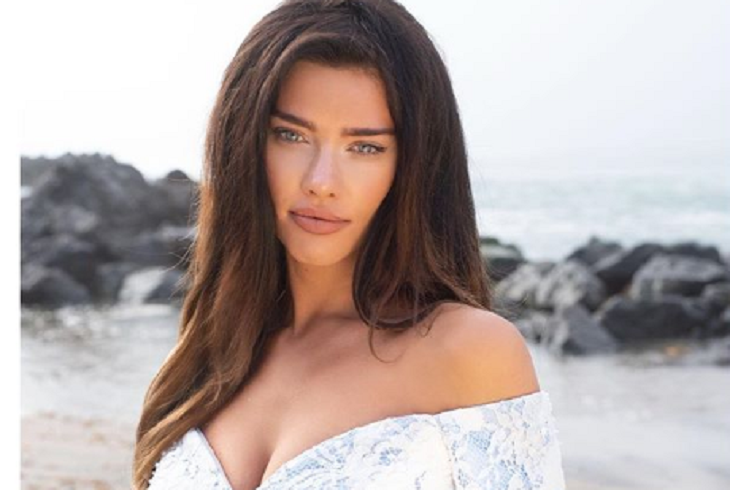 The Bold and the Beautiful (B&B) spoilers tease that Steffy Forrester (Jacqueline MacInnes Wood) will return on B&B Thursday’s show.  She will be stunned to find out how much things have changed since she left and she will have some tough questions for Thomas Forrester (Matthew Atkinson) and Liam Spencer (Scott Clifton).

Like many B&B fans, we have been counting down until Steffy returned to the show. SHe was busy bonding with her son, Rise and adjusting to being a mother.  Now, that she’s back, she shared a few tidbits on how her first day back went.  Here’s what you need to know about it.

B&B Spoilers– Jacqueline Was Shocked By The Changes

First, the actress said she never saw it coming that Flo Fulton (Katrina Bowden) was a Logan. She figured they’d tie her in somewhere and she assumed, like many of the B&B fans, that Flo would be a Spencer. However, TPTB had other plans.

The Bold And The Beautiful Spoilers: Wednesday, May 22 – Lope’s Marriage Falls Apart – Flo’s Paralyzed By Feelings Of Guilt

Not only did she learn that Flo is sticking around, with her mother Shauna Fulton (Denise Richards), she also had to digest that her adopted daughter Phoebe is a Logan too.  And as you can imagine, Steffy has a moment of panic when she worries that Flo could change her mind and take Phoebe back.

That pretty much brought Wood up to speed on what she missed.  And like Steffy, Jacqueline is having trouble adjusting to the new routine with a tot in tow.

Wood’s First Day Back At B&B Was A Mess

Jacqueline said that before going back to work, she had a routine down with Rise.  She bragged that her son is a very calm baby but some days are hard while other days he’s the “chillest” baby in the world. She is doing her best to make the most of it, even on days of no sleep and feeling overwhelmed by it all.

Wood said that everyone has been great and supportive on the set.  She went to the studio and did a few interviews on her maternity leave. And, she said they were difficult to manage, so going into her first day, she felt overwhelmed and a little anxious.

On the first day, she taped two episodes.  Then, she had to go to the wardrobe room and get fitted for the next two weeks of shows.

“I had two episodes on that first day,” Wood explained to Soap Opera Digest. “I had to go to wardrobe and they were doing my outfits for the next two weeks so that took some time.  I remember looking at the monitor and they were on item number 16 and I was up at item 21.  I had six scenes to tape.  My hair was still soaking wet. I had no makeup on.  I rushed downstairs and got ready in like 15 minutes.”

“Scott (Clifton, Liam Spencer) came into my dressing room chasing me because she needed to run lines,” Jacqueline continued.  “I had to pump my boobs and now item 19 is up.  So now, I am running lines with Scott in the middle of the hair room with my shirt off and pumping my boobs.”

Wood jokes it was her welcome to motherhood and she is in awe of how Steffy Forrester pulls it off so effortlessly.

Are you glad Steffy is finally back?  Don’t forget to come back later for more The Bold and the Beautiful (B&B) spoilers, news, and casting updates!