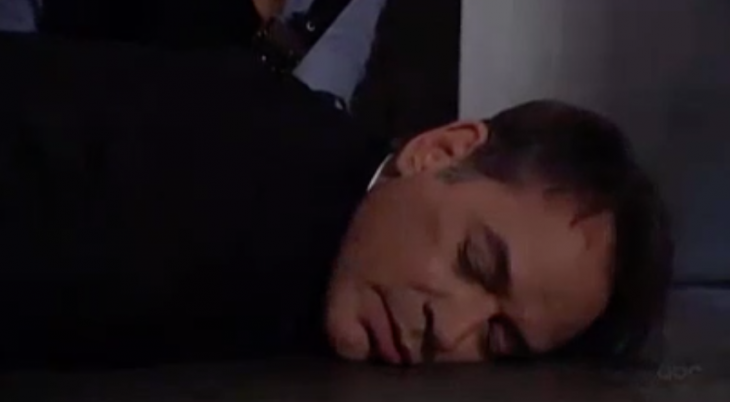 Welcome to your Friday, May 24 General Hospital recap! We begin our day at the Dawn of Day house, where Sonny Corinthos (Maurice Bernard) and Margeaux Dawson (Elizabeth Hendrickson) the men he just knocked out on his way in. Sonny asks Margeaux where her leader Shiloh Archer (Coby Ryan McLaughlin) is.

At a secret location, Shiloh has a passed-out Sam McCall (Kelly Monaco) with him. He holds her down and starts kissing her, she can’t fight him off.

At the police station, Laura Spencer (Genie Francis) calls her daughter Lulu Falconeri (Emme Rylan) and tells her to be safe. Curtis Ashford (Donnell Turner) approaches and says that Jordan Ashford (Brianne Nicole Henry) had a cardiac event and they must find Ryan soon. Curtis says he must be found alive as Jordan’s life depends on it.

At the police station, Harrison Chase (Josh Swickard) is frantically trying to find where Ava is. Lulu Falconeri approaches and asks what info he has. Lulu is worried about Ava and Chase says she may have set a trap for Ryan. Laura calls Chase and says that Ryan cannot be killed, he must be taken alive.

At Ava Jerome’s (Maura West) cabin, she is holding Ryan Chamberlain (Jon Lindstrom) at gunpoint. Ryan asks what she is doing as he steps closer to her; she shoots off the gun. The gunshot warning misses Ryan and Ava says that he’s going to face her wrath like all his victims faced his. Ryan says he killed Kiki out of his love for her.

Ryan tells Ava that Kiki was terrified and that she tried to get away. That she cried for her and told him that she loved his mother. Ava tells Ryan that this will be his end and that the truth hurts, just as Curtis arrives.

Curtis Ashford explains to Laura Spencer that Kevin is not a match anymore for a transplant, but that Ryan is a match. Laura hugs Curtis as Lucy Coe (Lynne Herring) comes around the corner and asks what’s happening. Curtis explains to Lucy about the kidney transplant.

Lucy realizes that she may know where Ava is hiding. She sold her a cabin in the woods outside of town in the mountains.

Sonny says that he thought Margeaux was smarter than to fall into the trap of Dawn of Day. He asks how she could get so wrapped up in it, she says that it’s his fault. Margeaux says Sonny taking her father and mother away ruined her life. Dawn of Day gave her a place of comfort and Shiloh is a good man.

Margeaux asks Sonny why he hates Shiloh so much, he explains about his assaults on women. Margeaux continues to defend Shiloh and Sonny tells her that she needs to face the truth.

Brad Cooper (Perry Shen) shows up at Julian Jerome’s (William Devry) apartment to tell him what happened at the ball. He’s worried that Shiloh is going to take Wiley back. Julian can’t believe that Willow and Shiloh are Wiley’s parents.

Julian and Brad know that Wiley is actually not Willow’s baby at all.

At a secret location, Shiloh begins to unzip his pants to have sex with Sam. Suddenly Jason Morgan (Steve Burton) appears and throws him off of her. Jason beats Shiloh to a pulp and throws him down a circular staircase where he is unconscious. Jason checks on Sam and makes sure she is okay.

Jason takes Sam to General Hospital to get checked out. 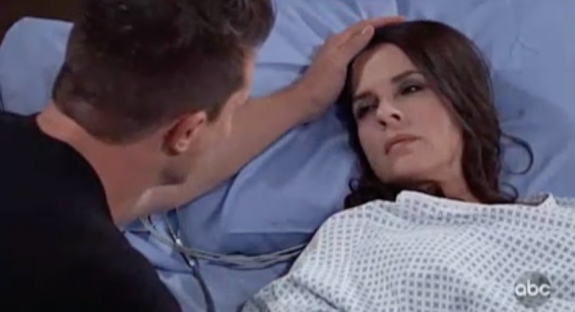 Laura and Lulu discuss how sick Jordan is and that Ryan is a donor.

At the hospital, Sam is dreaming about what happened to her when she was taken by Shiloh. She awakens and grabs Jason.

Sonny goes into Shiloh’s hospital room where he is banged up and threatens him.

Curtis tries to get Ava to give up the gun and let Ryan rot in a jail cell. The police show up and put Ryan in handcuffs while reading his rights. Ryan says “You still love me” as Ava grabs a knife and stabs him the back………flash to preview