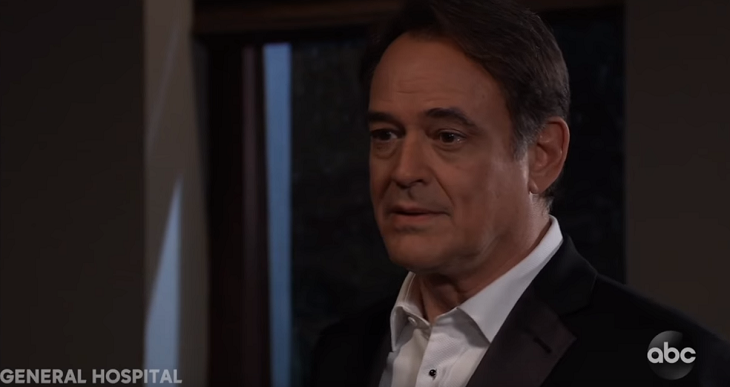 General Hospital (GH) spoilers tease that Mayor Laura Webber (Genie Francis) will call Detective Harrison Chase (Josh Swickard) this week! After she reamed out District Attorney Margaux Dawson (Elizabeth Hendrickson) for not taking the possibility of Ryan Chamberlain’s (Jon Lindstrom)being alive seriously the first time and blaming her for April Trembley’s death, Margaux finally lets the PCPD do whatever they have to do including the use of deadly force to take Ryan down!

In the meantime, Curtis Ashford (Donnell Turner) is updating his wife, Commissioner Jordan Ashford (Briana Nicole Henry) on the progress of the Chamberlain case when she passes out!

After being checked over by Monica Quartermaine (Leslie Charleson) Curtis is informed that Jordan has an underlying heart condition which although by itself is not fatal, it can be exacerbated by dialysis and become fatal, so Jordan needs a transplant right away, and as Ryan is the identical twin of Dr. Kevin Collins (Jon Lindstrom), as long as Ryan doesn’t have any conditions such as prediabetes, which ruled Kevin out as a match, then Ryan would be too!

Curtis will contact Laura and update her on Jordan’s condition, and let her know that Ryan being able to donate a kidney will be Jordan’s only chance of survival! Kidneys deteriorate quickly, so it is generally best if the donor is alive or kept on life support to stay viable for donation.

Jordan's awake and wants an update on the hunt for Ryan. But working is the last thing she should be doing in her condition.
A dramatic, new #GH starts RIGHT NOW on ABC! @Bri_Nic_Henry pic.twitter.com/qbCUGuapTF

Since Chase seems to be the one at the forefront of the search for Ryan and heavily involved in the case, having been the one to inform Laura, Mac and Felicia Scorpio (John J. York, Kristina Wagner) and Kevin that they needed to stay put and not try to take Ryan down or approach him, and that deadly force was authorized, Laura will call him in an effort to make sure Ryan is taken alive so they can check him out for kidney donation to save Jordan’s life!