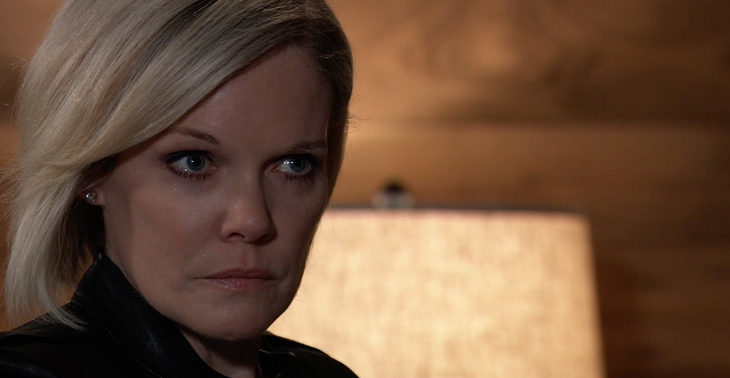 General Hospital (GH) spoilers for Tuesday, May 28 promise the fans another day of drama and excitement after a long weekend! First, Dr. Kim Nero (Tamara Braun) is worried about Julian Jerome (William DeVry) who does have a lot on his plate, and that might not even include the news about his sister Ava Jerome (Maura West) being in some potential trouble!

Julian is likely preoccupied about how to keep Shiloh Archer (Coby Ryan McLaughlin) away from Wiley Cooper-Jones (Eric and Theodore) and the baby swap secret Brad Cooper (Parry Shen) has been holding from coming out as a result of the baby swap. Julian now knows about the swap but not that Wiley is really Jonah Corinthos, although in Friday’s episode Brad appeared ready to spill! Kim wants Julian to tell her if he’s in trouble!

Next, Dr. Neil Byrne (Joe Flanigan) talks to someone and wants to know how the plan worked! He may be getting an update from either Sonny Corinthos (Maurice Benard) or Alexis Davis (Nancy Lee Grahn) about Kristina Corinthos-Davis (Lexi Ainsworth) about her exit therapy plan and if she is doing well in not trying to go back to Dawn of Day.

At General Hospital, Curtis Ashford (Donnell Turner) is in his wife Police Commissioner Jordan Ashford’s (Briana Nicole Henry) hospital room. She looks very worried as she asks for clarification on what he is telling her.

Curtis managed to get Ryan Chamberlain (Jon Lindstrom), who barring any health complications would be a donor match for Jordan alive, but then Ava stabbed him in the back as police were taking him into custody! General Hospital viewers and Curtis, Jordan and the rest of their family can only hope Ava didn’t hit the kidneys!

Meanwhile, Ava herself sits in custody at the Port Charles Police Department where Scott Baldwin (Kin Shriner) has obviously stepped up to defend her as her attorney, and he warns her that if Ryan dies, she will be facing a murder rap!

Julian's doing damage control, West Coast. But now that Shiloh knows he has a son, how much longer can he keep Wiley's parentage a secret?
An all-new #GH starts RIGHT NOW on ABC! @WilliamdeVry1 @parryshen pic.twitter.com/3vfZhoZJWC

At the Davis home, Alexis and daughter Kristina are talking, and Kristina tells Alexis there’s something about Dawn of Day that she hadn’t told her. It sounds like she’s getting ready to tell her mom that she put a secret about Alexis on her pledge; of course, as General Hospital viewers know, Alexis cannot be tried again for the death by homicide of Kristina’s former abusive boyfriend Kiefer Bauer (Christian Alexander), but it does speak to the condition of their mother-daughter relationship for Kristina to even offer something about her mom!

At General Hospital, Jason Morgan (Steve Burton) talks to Dr. Monica Quartermaine (Leslie Charleson) about Sam McCall’s (Kelly Monaco) experience at the hands of Shiloh Archer (Coby Ryan McLaughlin) which he rescued her from. He tells her he needs medical proof that Shiloh drugged Sam.

Elsewhere in the hospital, Sam is in Shiloh’s hospital room taunting him; she says “game over, Shiloh – you lose!”