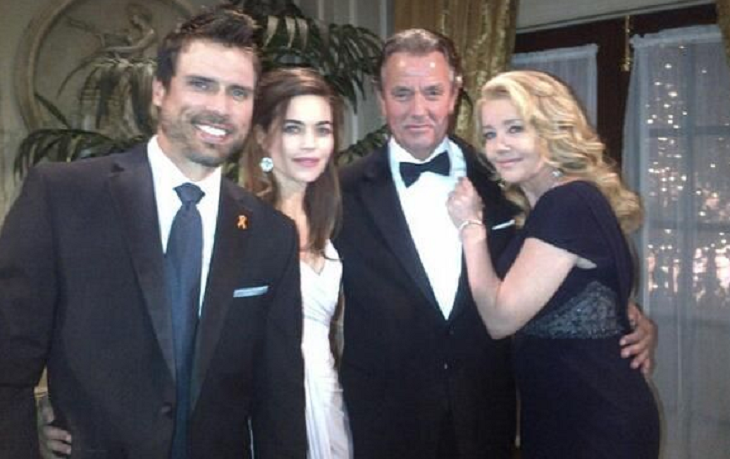 The Young and the Restless (Y&R) spoilers tease that Victor Newman’s (Eric Braeden) hopes for his prodigal son, Adam Newman (Mark Grossman), to be given a second chance by his three other children are wishful. Based on his deep, dark, and now recalled past, the three Newman siblings are naturally leery of what their father intends.

Vicki Newman (Amelia Heinle), Nick Newman (Joshua Morrow), and Abby Newman (Melissa Ordway) do care about their father. In fact, they’re worried about him. Together they feel that Victor is letting himself open for Adam to damage him and them again. Nikki Newman (Melody Thomas Scott) hasn’t said much so far, while trying to support her husband and the children, including the two who aren’t her own.

Y&R Spoilers– What Is Adam’s Motive?

Adam used the word prodigal within Y&R’s dialogue. Yes, this storyline plays off a timeless Bible parable, where a long-gone son returned home. That man was welcomed by his father. But the other son, who’d remained loyal while his reckless brother was gone, resented the fact that the father so quickly forgave his returned sibling.

It was interesting that Adam noticed Victor’s emergent positive demeanor. He told his father that this side of him must have developed within the past few years while he was gone. Well, somewhat.

Victor is still Victor, but Adam’s death rocked him to the core. He hasn’t been exactly the same since. Viewers recall that Nick got the best of him in founding Dark Horse, which came after J.T. Hellstrom (Thad Luckinbill), also recently back from the dead, twice tried to kill the Moustache. Though that was related to a brain tumor.

Young And The Restless Spoilers– Will The Newman Siblings Ever Accept Adam?

To their credit, Vicki, Nick, and Abby are genuinely fearful of what wrath Adam’s return might cause. Learning that he was shot, within a day of his return no less, only serves to heighten their uncertainty.

Nick and Abby aren’t involved at Newman Enterprises, but Vicki is. She should be rattled by Adam’s latest comeback, as Victor is likely to lure him back to the family business.

As for Nick and Abby, both felt slighted and alienated by their father. Yet here’s Adam, with all the terrible things he’s done through the years, welcomed back with open arms by Victor. They feel he doesn’t deserve and hasn’t earned that level of trust, yet he has it.

Victor is looking at today with a bias toward family unity. Vicki, Nick, Abby, and now, amnesia no more Adam, see Genoa City differently. And so, the Newman ship sails on through building rocky storms.