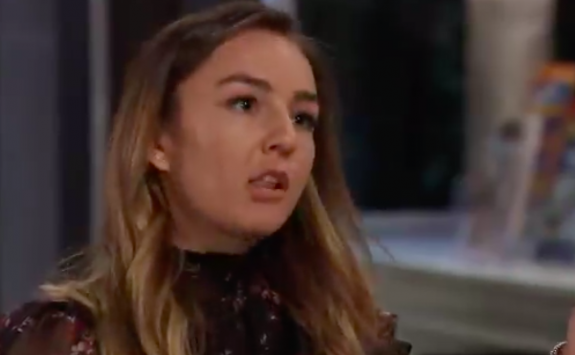 General Hospital spoilers tease that Alexis Davis (Nancy Lee Grahn) will put two and two together in Tuesday’s episode of General Hospital when her daughter, Kristina Corinthos-Davis (Lexi Ainsworth) admits that she hasn’t told her everything about Dawn of Day.

Alexis will likely figure out that the secret she gave Shiloh Archer (Coby Ryan McLaughlin) in her pledge, which still has not been retrieved, is about her rather than about her father, Sonny Corinthos (Maurice Benard) as he has been afraid of!

As General Hospital viewers already know, Kristina put the “secret” about her mother running over her abusive boyfriend, Kiefer Bauer (Christian Alexander) on purpose as Kristina was in the backseat of her car. Alexis had found Kristina badly beaten by Kiefer and was rushing her to the hospital when he appeared in the road in front of her, and she hit him and didn’t stop; but she was trying to get Kristina medical care; a mother may not always be thinking call 911 in that situation!

General Hospital Spoilers: Will Alexis Davis Be Tried For A Crime A Second Time?

If General Hospital powers that be didn’t show that as a red herring, then Alexis was already tried for that and cannot be tried again; and she got community service which was performed long ago. Shiloh can’t use that as leverage because of the legal restrictions concerning double jeopardy, which means a person cannot be tried twice for the same crime.

However, the fact that Kristina would pledge as a secret something that were it not for the double jeopardy restrictions could get Alexis in lots of trouble and possibly even imprisoned, will concern her about how her daughter really feels about her and how she really felt about her when she made that pledge.

However, Kristina must feel guilty about giving that secret or she wouldn’t want to talk to Alexis about it, so there is that. Kristina feels that she has rather a bad reputation with her family, and that everyone expects her to mess up and fail, as she vented in the exit therapy sessions, and she just wants to be trusted!

It is a true fact that trust sometimes must be earned back, but second chances should not have to be earned, or even third or fourth chances! Alexis and Kristina may need to have some family therapy and include daddy Sonny as well to work things out with Kristina and makes sure she feels loved and trusted!

If you've ever wondered what goes into bringing the #NursesBall to life, look no further! @IngoRademacher #GH #BehindTheScenes pic.twitter.com/FJk5ZNTMeE