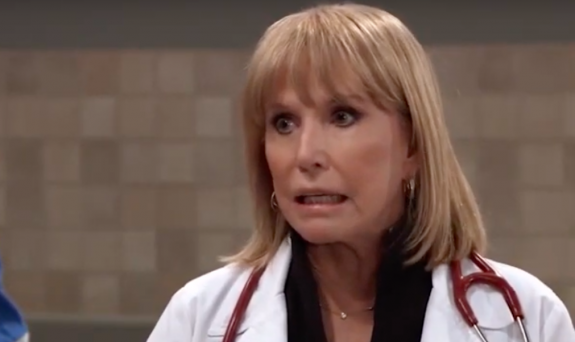 General Hospital spoilers tease that Dr. Monica Quartermaine (Leslie Charleson) will give Drew Cain (Billy Miller) her blessing, and it will probably be concerning his plans to go together with Dr. Kim Nero (Tamara Braun) to Mount Kilimanjaro to scatter their son Oscar Nero Quartermaine’s (Garren Stitt) ashes, as he requested, rather than put his remains in the Quartermaine family crypt as all the other deceased family members have been interred in. However, that doesn’t preclude a memorial plaque being put up for Oscar there, which may well happen as well.

Given that according to comings and goings news in soaps.com, Billy Miller and Tamara Braun are being written out of the General Hospital canvas temporarily, General Hospital viewers can assume that possibly Drew and Kim will make this an extended trip, which should start the first week of June according to down-the-road spoilers.

Both parents are grieving, obviously, although understandably it will be much harder on Kim than it is on Drew, her having known Oscar all his life and Drew only knowing him for the last year or so.

Summer spoilers also tease that Kim will grieve in a different way than Drew, and that Kim’s actions will affect both Drew and Julian Jerome (William DeVry) and their lives in a profound way! This could be taken as a rather ominous clue, meaning possibly Kim will not return to Port Charles with Drew.

However, the comings and goings news did say both were only being written out temporarily, so fans should see Kim again unless her actions are only played out off-screen and relayed to Julian by a returning Drew!

The death of Oscar has affected many lives in Port Charles, among them his girlfriend Josslyn Jacks (Eden McCoy) and close friends Cameron Webber (William Lipton) and Trina Robinson (Sydney Mikayla). General Hospital viewers have been deeply affected as well, many fans saying they cried through the whole program when Oscar passed.

This young man who didn’t have a very long life was wise well beyond his years, and will be missed sorely by his family and friends so it is understandable why Drew and Kim would spend time away dealing with his loss at such a young age; stay tuned to General Hospital and keep checking General Hospital spoilers frequently for all the latest news, updates, and developments!