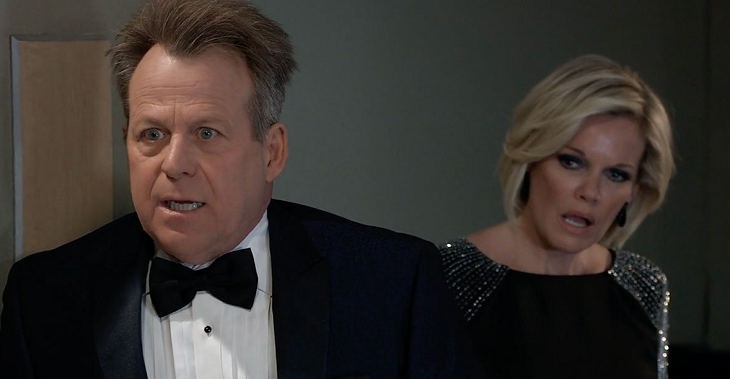 General Hospital (GH) spoilers tease that Scott Baldwin (Kin Shriner) will step up to defend his friend Ava Jerome (Maura West) this week, and a new promo released by ABC shows the details!

Ava, as General Hospital viewers know, stabbed Ryan Chamberlain (Jon Lindstrom) in the back with his own knife in Friday, May 24th’s episode just as police were taking him into custody to face charges for the murders of Kiki Jerome, (Hayley Erin) Mary Pat Ingles (Patricia Bethune) and Peyton Mills (John Patrick Jordan) and the attacks on Lulu Falconeri (Emme Rylan) and Franco Baldwin (Roger Howarth). Ava, of course, was out for revenge for Ryan’s killing her daughter Kiki and had set a trap for him.

In the promo, Ava sits in the questioning room at the Port Charles Police Department where she awaits arraignment on charges for the stabbing of Ryan when Scott walks in. She wants to know why he’s there; he insists on defending her even though she doesn’t think she needs a lawyer; she wants to know if Ryan is dead or not and if she had succeeded in killing him.

Scott tells her he heard about her arrest on the police scanner and came to help, and that he’s been watching the news but hasn’t heard anything about Ryan’s condition. He keeps insisting he’s not letting her walk into the arraignment alone without legal representation.

Ava reiterates to Scott that she is not sorry she stabbed Ryan, only is sorry that she didn’t twist the knife! Scott warns her not to say anything like that in the courtroom because if Ryan dies or is already dead she will be facing a murder rap!

We're taking tomorrow off – but don't fret! Here's a sneak peek at Tuesday's all-new #GH. Ava's going to need all the help she can get. CLICK TO WATCH: https://t.co/LeMlxA1ITd

She says to Scott it sounds like he’s telling her that her act against Ryan is something to be ashamed of, but she is proud of it and only wants to get justice for Kiki. Scott continues to tell her not to say anything like that in the courtroom during the arraignment!

General Hospital viewers know there will be justice – but it may not be the justice that Ava wants, which is her succeeding in the murder of Ryan Chamberlain as revenge for his murder of Kiki Jerome.