‘The Bold and the Beautiful’ POLL: When Will Liam and Steffy Reunite? 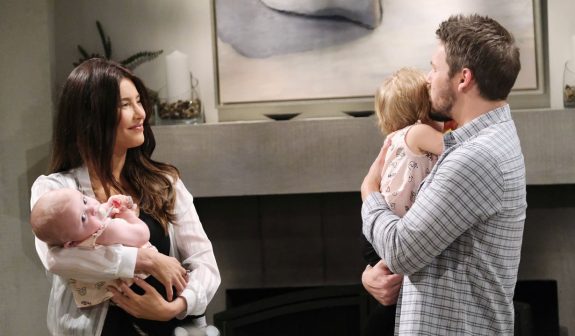 It appears clear on ‘The Bold and the Beautiful’. Liam Spencer (Scott Clifton) and Steffy Forrester (Jacqueline MacInnes Wood) are going to get back together now that Hope Spencer (Annika Noelle) wants to let ‘Lope’ go.

B&B Spoilers: Liam Spencer And Steffy Forrester’s Relationship May Not Be Over

But in response to Hope’s tell to Steffy about her decision to put the children first, Wood’s just-returned character offered an important statement. Hope shouldn’t assume just because ‘Lope’ was apparently ending that ‘Steam’ would reform.

It’s an important plot point to consider and also one that none of the involved characters can fully understand because they don’t yet have access to the information their observing audience does. Yet being the key word in the last sentence.

The Bold And The Beautiful Spoilers: Wyatt And Flo Make Love—Beth Time Bomb Closing In

Bold And The Beautiful Spoilers: Phoebe Forrester’s True Identity Could Change Everything

If Phoebe Forrester (Isabella de Armas and Rosalind Aune) is revealed as Beth Spencer before anything serious develops between Steffy and Liam and or between Hope and Thomas Forrester (Matthew Atkinson), various scenarios could unfold.

Assume that Flo Fulton-Logan (Katrina Bowden) simply can’t take it any more and spills to Hope one day at work, or is overheard by whoever talking inside Eric Forrester’s (John McCook) palatial Beverly Hills estate. Well, Hope and Liam would immediately contact Steffy, assuming she wasn’t present for the mega-plot drop herself, and Phoebe would be heading back to her true parents shortly thereafter.

B&B Spoilers: Steffy Forrester Adoption Could Be Null And Void

Steffy adopted the girl who’s being called Phoebe under false pretenses and therefore, surely, won’t be allowed to keep her. With whatever natural protective emotions might result in the immediate aftermath, Steffy is also the type of person who would do what’s right and want Beth with Hope and Liam.

Next, assume that Hope and Thomas become a couple first. That seemingly lesser possibility would dash Liam’s existing belief that his marriage is still salvageable. With that in mind, he would need a shoulder to lean on.

Bold And The Beautiful Spoilers: Will “Steam” Be A Successful Relationship?

If Steffy and Liam rekindle their romance first (or along with whatever Hope and Thomas develop) as an extension of the increased amount of time they’ll be spending together with the girls, then a full ‘Steam’ ahead storyline will be increasingly likely, with whenever Phoebe reverts to her Beth identity.

Steffy and Liam’s love for each other never ended, is just was shelved. Steffy convinced ‘Lope’ to be with each other. But now that they’re not, ‘Steam’ has a serious shot at revival. Of course, it’s fair to respond to the question below by stating that an apparent reunion won’t happen.

Fans of ‘The Bold and the Beautiful’ rightfully express their opinions on a regular basis. So, when will Liam and Steffy reunite? Please vote in our poll below!