Days Of Our Lives Spoilers: Xander And His Partner’s Plan Comes Into Focus — Kristen Reveals Her End Game 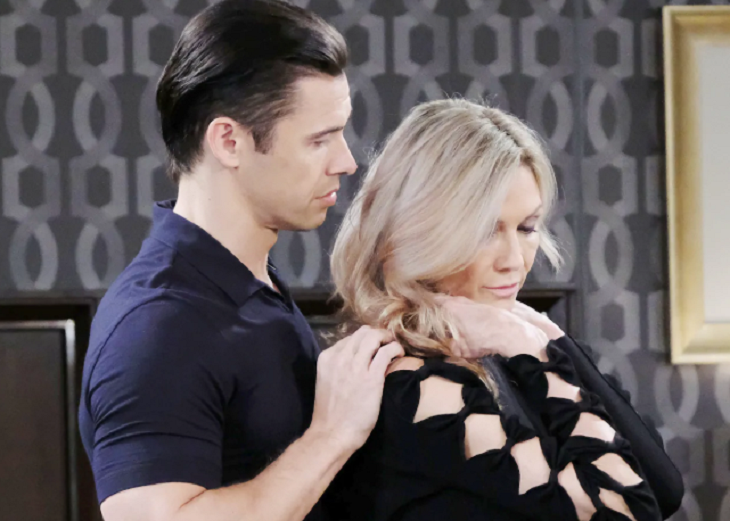 Days of Our Lives (DOOL) spoilers tease that Xander Cook Kiriakis (Paul Telfer) and his partner, which has been revealed as Kristen DiMera (Stacy Haiduk) in a Nicole Walker (Arianne Zucker) mask, plan will come into focus this week!

Kristen’s endgame is getting Brady Black (Eric Martsolf) back romantically, but she’s disguising herself as Nicole to do it, which according to the new Days of Our Lives promo video, may or may not work. Xander brings up a very good point that Brady might be able to tell the difference once the clothes are off, since he has been with both Kristen and Nicole in the past, and won’t that spoil Kristen’s plan?

This will be a hard day to forget. #DAYS pic.twitter.com/UrQEr2a1ZP

It appears that Xander is merely the means to an end and that Kristen is the force behind the farce! It still remains a mystery as to why Holly Jonas (Scarlett and Harlow Mallory) had to be kidnapped and her death has been faked, other than that Kristen didn’t want “that whiny little brat” and Kristen is impersonating Nicole and bulldozing all of Nicole’s former loving and supportive relationships so that all Nicole has left is Brady on her side, which is exactly what Kristen wants!

Of course, now that Eric Brady (Greg Vaughan) and Brady have made amends and are acting like brothers, in reality being stepbrothers, Kristen, as Nicole will set out to destroy their relationship as well!

As Days of Our Lives viewers will recall, Kristen herself was thought to have been killed in the same explosion as Nicole was and Xander was presumed dead as well; and Kristen is one – big – evil – piece – of – work!

DAYS Spoilers– Kristen’s Plan Is Not Well Thought Out

In January 2013, she raped Eric and framed Nicole for it; no wonder she didn’t want him to see her naked, he may have recognized her body! However, Kristen has some bad history in the new Police Commissioner Eve Deveraux’s (Kassie DePaiva) eyes too, having kidnapped her just last September and threatened to kill her, and held Claire Brady (Olivia Rose Keegan) and Eric at gunpoint around the same time!

Claire’s off the rails and although Days of Our Lives spoilers don’t say anything about Claire and fakeNicoleKristen crossing each other’s path, she’d better watch out and steer clear of Claire! And Eve being the new commissioner may work to Salem’s advantage where fakeNicoleKristen is concerned!