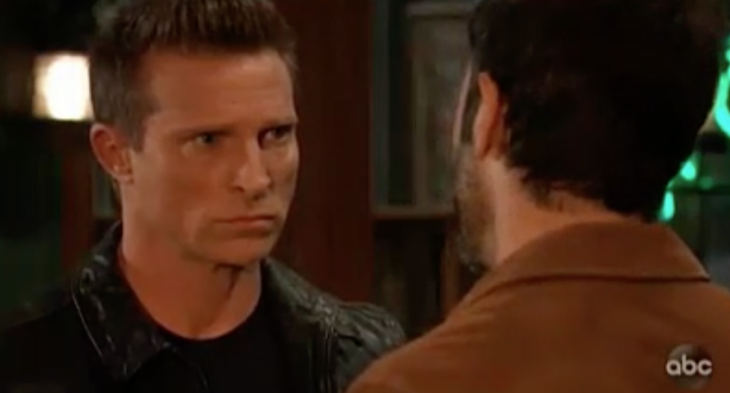 As Sonny Corinthos (Maurice Benard) and Jason waited outside the Dawn of Day house the night Sam McCall’s (Kelly Monaco) initiation was to have taken place, monitoring the bugs that Damian Spinelli (Bradford Anderson) put in place, they hear Shiloh ranting about Willow Tait (Katelyn MacMullen) keeping their baby from him, and probably through Michael Corinthos (Chad Duell) they will find out that the baby Lucas Jones (Ryan Carnes) and Brad Cooper (Parry Shen) adopted is the baby in question.

Or, Lucas may talk to Carly Corinthos (Laura Wright) and she might tell Sonny or Jason, or both. Even though Carly is kind of on the outside looking in, she knows Shiloh is bad news and wouldn’t want him getting ahold of anyone’s baby including his own!

GH Spoilers– Who Knows Wiley Is Michael And Nelle’s Son?

No one except Nelle Benson (Chloe Lanier) and Brad Cooper (Parry Shen) know that little Wiley is really Jonah, with the possible exception of a suspicious Liesl Obrecht (Kathleen Gati) who delivered the baby. Julian Jerome (William DeVry) knows that the baby is not the original baby and that there was a swap with a homeless woman in the woods but he doesn’t know he’s Jonah, Michael and Nelle’s baby.

He too will become invested in protecting Wiley and Brad also even more than he already is, so Shiloh’s got a mobster who is really the baby’s birth step-grandfather, an ex-mobster who is the adoptive grandfather, and a mob enforcer who is the real birth father’s uncle, the real birth father and his “destined’s” cop boyfriend all breathing down his neck to protect both Willow and especially Wiley from him!

Julian's doing damage control, West Coast. But now that Shiloh knows he has a son, how much longer can he keep Wiley's parentage a secret?
An all-new #GH starts RIGHT NOW on ABC! @WilliamdeVry1 @parryshen pic.twitter.com/3vfZhoZJWC

General Hospital Spoilers– Here’s Why It Matters To Jason!

For any General Hospital viewers reading this who might be a little confused about the family trees, Julian is Lucas’ birth father, Lucas was adopted by Carly’s mother Bobbie Spencer (Jacklyn Zeman) and her husband, and Michael’s birth father was the late AJ Quartermaine (most recently Sean Kanan), Jason’s half-brother, and Michael was adopted as a child by Sonny when he and Carly were married the first time.