General Hospital Spoilers: Shiloh Plays Both Sides– What Is The Cult Leader Planning? 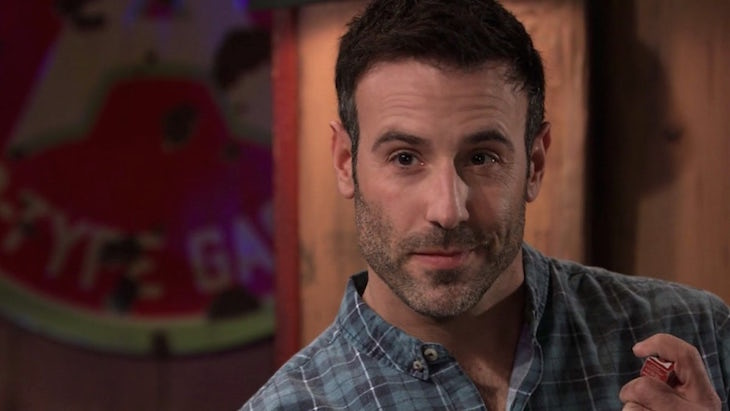 General Hospital (GH) spoilers tease that Shiloh Archer (Coby Ryan McLaughlin) is going to play both sides this week, which usually means he’s going to act like the toddler with the overalls that say “Little Angel” on one leg and “Little Devil” on the other leg!

This will probably be about being thrown down the spiral staircase at the lighthouse by Jason Morgan (Steve Burton) and he might try to press charges against him and then “forgive him” when he finds out the charges might not stick!

That is one possible scenario, or it might be about Willow Tait (Katelyn MacMullen) and his baby and he might be playing Brad Cooper (Parry Shen) and trying to get ahold of the baby, known as “Wiley Cooper Jones” (Eric and Theodore) but who is really Jonah Corinthos!

Of course, if Detective Harrison Chase (Josh Swickard) gets the call about charges against Jason, when he sees it’s Shiloh he will be on Jason’s side anyway!

GH SPoilers– Will Shiloh Use Brad To Get Wiley?

It’s pretty easy for General Hospital viewers to imagine Shiloh trying to get to the baby through Brad since Brad has already fallen for Shiloh’s Dawn of Day garbage hook, line and sinker!

In recent episodes of General Hospital, Lucas Jones (Ryan Carnes) has come to realize that Willow and Shiloh are Wiley’s birth parents, and Shiloh bullied the truth out of Willow, after hearing Nina Reeves (Michelle Stafford) sass Willow about giving up a child!

The more pieces Lucas puts together, the closer he is to the truth about Wiley's parentage. What is Brad's next move?#GH is brand-new and STARTS NOW on ABC! @parryshen @RyanCarnes1 pic.twitter.com/V5ZeRDTs4R

Willow told him she miscarried but of course, Shiloh didn’t believe her and got pulled off Willow and thrown down to the floor by Michael! However, Brad still took Shiloh’s side and didn’t believe Shiloh would hurt anyone, let alone a child!

Michael, Lucas, Chase, Julian Jerome, (William DeVry), Jason Morgan and Sonny Corinthos (Maurice Benard) will all band together to protect Willow and Wiley against Shiloh in coming weeks! Julian will tell Brad not to talk to anyone about his secret in no uncertain terms and that includes Shiloh!

Brad will certainly be in a conundrum no matter what he does, because if Shiloh pursues paternity tests he will be forced to fake them if they’re done at GH to keep Shiloh from taking Wiley, but if he is not on duty and the true paternity is shown, then Michael will take Wiley!