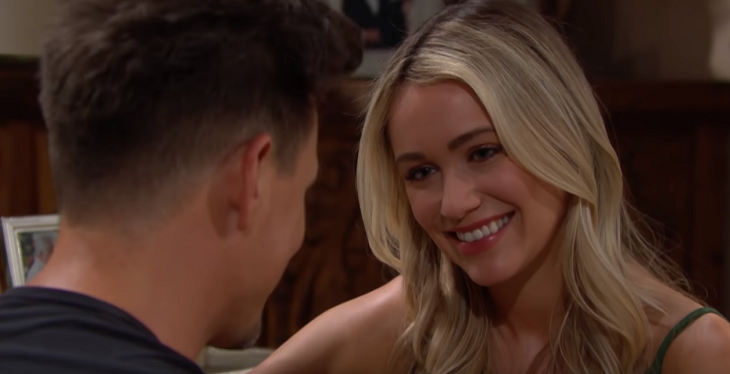 Flo Fulton-Logan (Katrina Bowden) still can’t believe the good fortune she’s enjoying on The Bold and the Beautiful. While Wyatt Spencer (Darin Brooks) flirts with her and also the truth, his revived sweetheart remains capable of stopping the madness.

All Flo needs to do is contact Hope Spencer (Annika Noelle) and arrange to meet with her in private. Tell no one what will be divulged and ensure that interruptions don’t take place. Then, Flo can simply tell her cousin that Beth Spencer (Madeline Valdez and River Davidson) never died and is living as Phoebe Forrester.

Sure, there would be fallout. But if Flo’s luck continues and Hope’s compassion is boundless, no one would go to jail. Legal repercussions would be avoided as Logan’s circle their opulent wagons around one of their own.

Yes, the above was a daydream sequence. While Flo is free to do as was written, B&B’s writing staff continues to masterful extend the drama through spring and maybe, into summer as well.

B&B Spoilers– Wyatt Will be Crushed By Flo’s Truth

Wyatt appears dumbfounded by the latest impressive woman who wants to be with him. Now, following Katie Logan (Heather Tom) and Sally Spectra (Courtney Hope), is Flo. Formerly a Fulton, who became a Logan via Wyatt’s assertive DNA search help.

What Brooks’ fortunate character doesn’t know is that Flo is not all sweetness and light, as he believes. The secret she forward, which is a major crime, had her agree to play birth mother to the child Reese Buckingham (Wayne Brady) stole from Wyatt’s brother, Liam Spencer (Scott Clifton), and Hope on Catalina Island on a most unfortunate dark and stormy night, which was the actual setting.

BOLD Spoilers– There Is No Happy Ending For Flo

The Sword of Damocles, a moral parable that is credited to Marcus Tullius Cicero nearly two-thousand years ago, can be applied to B&B’s current tale. Flo isn’t a court flatterer like Damocles was. But a sword does hang by a single thread over her head, as one did over Damocles while he was temporarily enjoying the good life.

If Flo tells what she knows, or if the Phoebe-Beth secret is revealed somehow else, her smooth ride ends. If she remains silent, the threat of doom (that being Flo’s sword) persists. Such are the elements of a timeless storyline.