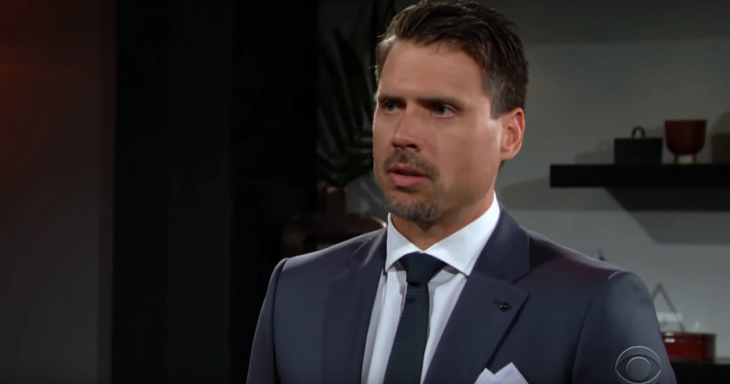 Adam Newman (Mark Grossman) is intent on affirming his biological and therefore, legal connection with Christian Newman (Jude and Ozzy McGuigen) on The Young and the Restless. Nick Newman (Joshua Morrow), Adam’s brother and Christian’s uncle, will eventually surrender, or be forced to give the boy up. But not yet, as is this clan’s bent.

It’s fully understandable how Nick feels. After all the back and forth plot lines related to Christian’s paternity (involving Dylan McAvoy, Steve Burton) and maternity (involving the then Sharon McAvoy, Sharon Case) played out in the past, Nick has mostly filled the parental role in Christian’s life. He loves the boy as though he were his own. Yet, moral logic is left out of Nick’s current equation.

Grossman’s character now remembers a nudge regarding the recently ended amnesia mini-arc, that he asked Nick to watch out for Christian. That happened in late summer 2016 when Adam (as then played by Justin Hartley) believed he was going to prison for many years. Yes, Victor Newman’s (Eric Braeden) sons had reached a genuine accord.

Adam knew, at that time, that he was the boy’s biological father. Compassion was being offered to Nick because Adam felt that the loss of Sage Newman (Kelly Sullivan), Christian’s mother, was enough. There was no reason to compound Nick’s pain by revealing that he wasn’t the Christian’s real father. So Adam and Chelsea Newman (Melissa Claire Egan) opted to remain silent.

In time Nick will come to see what’s right. He is a genetic father to three and fully grasps the unbreakable bond people have with their children. If the reverse soapy scenario were true, Nick would do whatever is necessary to regain his child from Adam.

Hardcore viewers know the lengths Nick was willing to go to when he gaslighted Victor last year when he took on the identity of J.T. Hellstrom (Thad Luckinbill). But Nick, like his dad and brother, often choose to live in a self-centered vacuum.

All Adam wants is his life back. The one that Chloe Mitchell (Elizabeth Hendrickson) took away because she believes that he took Delia Abbott’s (Sophie Pollono) life, via the accidental hit-and-run. Whether or not Adam was guilty in that instance, or another driver hit Delia could always become a future storyline.

But as this storyline plays out Nick must know, down deep inside, that he’s only delaying the inevitable. Christian will come to call him uncle, not dad. That title has been and will rightfully remain Adam’s.