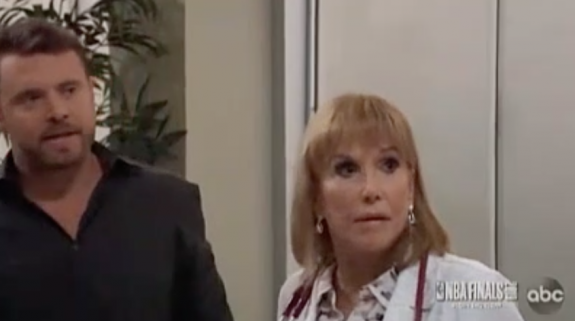 Welcome to your Tuesday, May 28 General Hospital recap! We begin our day at the police station where Ava a Jerome (Maura West) has been arrested. Scott Baldwin (Kin Shriner) arrives and says he is there to be her lawyer – he wants to help her. Ava says the only way he can help is if he brings confirmation that Ryan Chamberlain (Jon Lindstrom) is dead.

At General Hospital, Jordan Ashford (Brianne Nicole Henry) wakes up from a nap and her husband Curtis Ashford (Donnell Turner) comforts her. She asks if they have found Ryan.

Also, at the hospital, Monica Quartermaine (Leslie Charleson) is getting a phone update about Ryan’s surgery when Drew Cain (Billy Miller) approaches. He tells her that he and Kim Nero (Tamara Braun) are going away on a trip together.

Kim Nero (Tamara Braun) and Julian Jerome (William deVry) are discussing her trip with Drew. They decided to do the trip to Mount Kilimanjaro that Oscar wanted to go on. Julian calls Alexis Davis (Nancy Lee Grahn) and thanks her for helping with the trip planning. Kim asks him why he got arrested? Julian explains that he got arrested for defending his sister’s honor.

Drew tells Monica the plan to got to Kilimanjaro and spread Oscar’s ashes, she gives her blessing. She says she will still put a plaque in the family crypt.

Julian kisses Kim goodbye as she prepares to leave on her trip.

In the hospital outside Shiloh Archer’s (Coby Ryan McLaughlin) room, Sam McCall (Kelly Monaco) is telling Jason Morgan (Steve Burton) how much she hated doing this con. Jason goes to check on something and Sam enters Shiloh’s hospital room, jarring him awake.

Shiloh tells Sam that no matter how hard he tries; Jason cannot keep them apart. Sam yells at Shiloh and tells him that he lost. Sam rips into Shiloh about how he drugged her and made her sign the pledge.

Jason sees Monica and asks for the drug test results to be hurried up. Jason has the toxicology report and enters Shiloh’s room where he hands it to Sam. Sam says she recorded everything that happened. 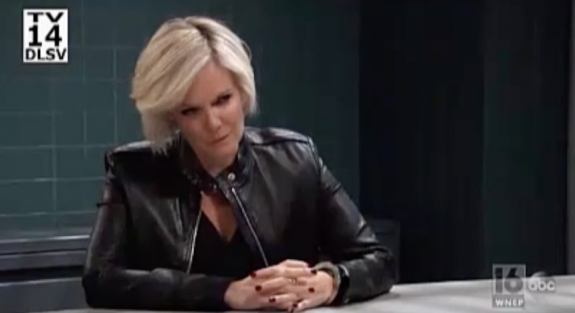 Alexis Davis (Nancy Lee Grahn) answers her door and lets Dr. Neil (Joe Flanagan) in her house. Alexis explains what happened between Sam and Shiloh at the Dawn of Day house. Alexis explains that the plan is a way to get the pledge that Kristina Davis (Lexi Ainsworth) gave to Shiloh. Kristina comes downstairs and says she is concerned about her sister Sam.

Ava wants to know if Ryan Chamberlain (Jon Lindstrom) is dead or alive on the operating table. Scotty says he does not know the status. Ava explains that she stabbed Ryan in the back and is hoping he dies. Scotty says that she will plead not guilty when she goes to court. Scotty says she needs to plead temporary insanity.

Scotty says that he is never going to give up on Ava. Scotty calls Julian and tells him he needs to come to the police station immediately. Julian arrives and Scotty tells him what happened.

Curtis explains to Jordan what happened with Ava’s plan to catch Ryan, but that she stabbed him in the back. Jordan says she does not blame Ava for what she did, but Curtis says we need Ryan alive. Curtis tells Jordan that she had a heart attack the night before – she starts to cry. 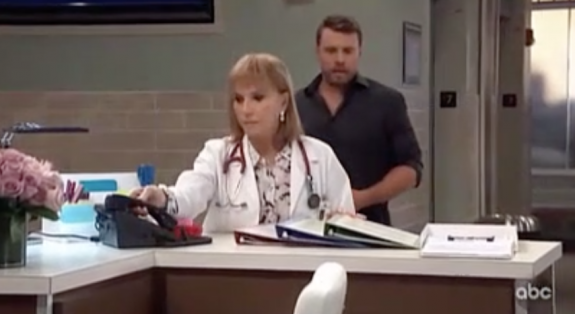 Ava says she is proud of what she did to Ryan.

Josslyn Jax comes over to Kim’s house and they reminisce about Oscar before her trip. Shiloh agrees to let Sam and Jason know where the pledges are hidden.

Monica is worried about Jordan’s condition and says she needs a transplant soon. Kristina tells Alexis and Dr. Neil that she gave Shiloh a big secret about her family. Alexis realizes the secret is about something she did.

Sam and Jason discover the pledges at the lighthouse, including Margeaux’s and Kristina’s………flash to preview…