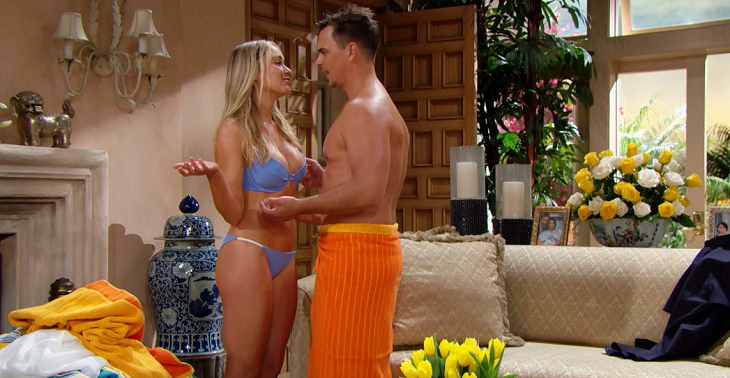 It begins with Hope telling Steffy that she wants to do what’s best for her daughters and for Thomas’ son Douglas Forrester (Henry Joseph Samiri). Steffy tells her that just because she’s ending her marriage to Liam Spencer (Scott Clifton) that doesn’t automatically mean that Steffy will take him back. However, Hope tries to plead with Steffy to make room for him in her family.

After Hope leaves, Ridge shows up to talk to Steffy. He tells her that Brooke Logan (Katherine Kelly Lang) is quite upset over Hope’s decision to divorce Liam. He tries to find out if Steffy is willing to take Liam back, but she doesn’t seem very keen on the idea. Ridge reiterates that Hope is doing what’s best for the children and that no one should intervene with her decision. He also says that he wishes Brooke would understand where Hope is coming from.

At the Forrester mansion, Flo and Wyatt are flirting in the pool. Wyatt offers to teach Flo how to surf and also asks her out on a dinner date. Flo suggests that they make something at home. Wyatt says he will let her cook dinner but wants to make dessert. They are making out on the couch but Wyatt can’t focus because of the large portrait of his mother in front of them.

Flo suggests that they take things slow because she’s concerned about Sally Spectra (Courtney Hope). Wyatt assures her that they are completely done and that he didn’t appreciate her dishonesty. They then kiss again before going upstairs. Flo admits to Wyatt that she never stopped loving him.

Back at the cabin, Hope is alone. Thomas and Douglas enter. Hope is cheered up when Douglas gives her a hug. He also tells her that he loves her so much. After Douglas leaves, Thomas and Hope talk about her situation with Liam. She admits that it was her idea to end their marriage. Thomas then tells her how much that means to him and how Douglas feels so safe whenever Hope is around. He then unexpectedly gives her a passionate kiss before Hope pulls away.

There are so many ways this storyline could go. It’ll be interesting to see how it all pans out. Don’t forget to come back for more The Bold and the Beautiful (B&B)  spoilers, news, and casting updates! As always, more detailed spoilers and a full collection of pictures for the week in question will appear on Soap Opera Spy, where there will be more clues and hints over exactly what’s going on.