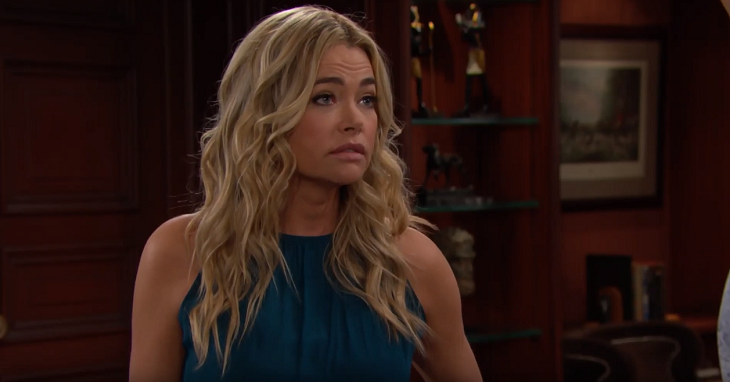 The Bold and the Beautiful star Denise Richards sat down and spoke to Soap Opera Digest. In the interview, she talked about her first day on the set and feeling old playing Flo Fulton’s (Katrina Bowden) mom. Here’s what she had to say.

B&B Contacted Her About The Role

She remembers feeling anxious about taking the role because it was out of her comfort zone. She knew that she had to do it to prove to herself that she could be successful in the fast-paced environment.

Even so, she wasn’t flying blind either. Denise was close friends with Darin Brooks (Wyatt Fuller) and Lisa Rinna (Billie, Days/RHOBH). She wanted to work with Darin after they worked together on the series, Blue Mountain State. And, Rinna encouraged her to go for it. She touted that she always enjoyed being on a soap. As Lisa pointed out if she didn’t like it, once her contract was over, they can just “kill her off or something.”

Her First Day On B&B Set

When Richards showed up for her first day, she was nervous. She knew they film an insane amount of material every day. On her first day, she learned they typically tape one to three episodes per day. She had no idea how fast-paced the actors work.

“My first day was actually quite easy,” Denise recalls. “I just had one scene (flashback: Flo called her mother to ask about her father’s identity). But then for what I would call my first week, I was in New York doing press and flew back to Los Angeles, and as soon as I landed, I went straight to CBS Studios and shot three episodes—- which is a lot. I had over 50 pages of dialogue that day. I was a little intimidated at first, but I got through it with flying colors.”

When Richards learned that she would have an adult daughter on the show, she was taken back a little. She joked with Katrina Bowden (Flo) that she had her when she was 12 because there is no way she’s old enough to have a 30-year-old daughter.

All in all, Denise is enjoying her time on B&B and she hopes to stick around for a long time. Don’t forget to come back later for more The Bold and the Beautiful (B&B) spoilers, news, and casting updates! As always, more detailed spoilers and a full collection of pictures for the week in question will appear on Soap Opera Spy, where there will be more clues and hints over exactly what’s going on.