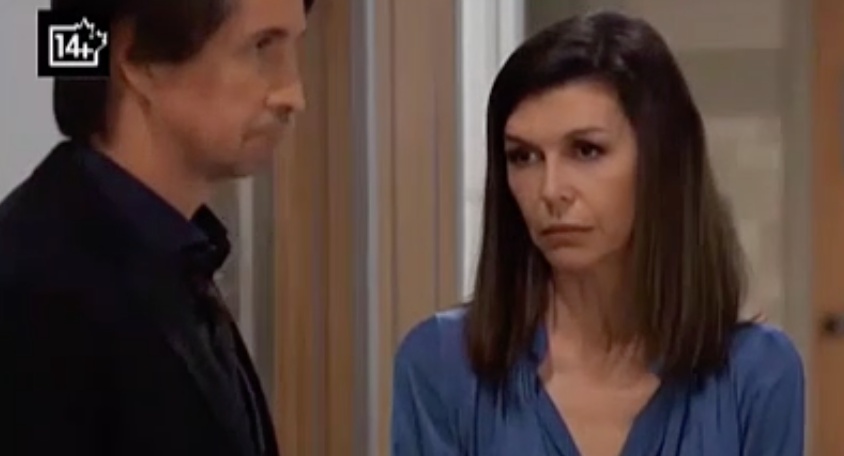 General Hospital (GH) spoilers tease that Anna Devane (Finola Hughes) will be creeped out by something this week and whatever it is will cause her once again to have to contact her sister Alexandra Marick (Finola Hughes)!

Obviously, it must be a nightmare, a confusing memory, or something else related to their past with each other and possibly a transferred memory or memories that Anna doesn’t know is hers or not. Here’s what you need to know about what’s ahead on GH.

GH Spoilers– How Will Alex Fit In The Storyline?

From the history of Anna Devane and Alex Marick on the defunct ABC soap, All My Children we know that Alex was stolen at birth from their real mother by a distant relative of their father, Thomas Devane (uncast actor). The relative, Charlotte Devane (Samantha Eggar) was heavily involved in a DVX type spy organization and had Alex brainwashed to believe that she was Anna, which sounds like this could relate to Dr. Arthur Cabot (Time Winters) memory transfer studies here on General Hospital.

Alex also at one time was brainwashed to seek out Anna and kill her, but then when she did find her and realized they were twins and not just doppelgangers she rescued her and saved her life instead. This was a far different Alex than what she is now portrayed on General Hospital! It’s a good bet if we go by that history, that Alex has more of Anna’s memories than Anna has of Alex’s. Alex even named a horse “Scorpio” but didn’t know where the name came from!

General Hospital Spoilers– Anna Is Scared Of One Of Her Memories!

However, many things that happened to Alex as she was growing up, and during the time she was being trained as a spy and an assassin were frightening. It’s possible that Anna has some of her memories from that time and she is frightened by thinking that she may have done something that in her right mind she never would have done, or it may be something done to Alex that Anna has the memory of.

Either way, Anna is creeped out and will need to make sense of it, and the only way she can contact Alex to see if she remembers it; or it could be Alex sends her something that creeps Anna out and she will want to confront her about it!